Properties:
All tourmalines are powerful healing crystals. Natural tourmaline wands are very directional, and are exceptional tools to direct and guide energy in the practice of crystal therapy. All contain boron and sodium, both of which act as energetic cleansers.

Black tourmaline (schorl) is one of the best and most frequently used crystals for protection against negative energy and negative intent, as well as being a powerful protection against electromagnetic radiation (EMR). It is extremely grounding, and also discharges tension while encouraging neutrality and a calm approach to difficult situations. It can be used in protection grids in the home or around a property. Place it between you and your computer monitor, or TV. Black tourmaline powder is currently being incorporated into fabric manufacture for this purpose. Black tourmaline eliminates unwanted energy through the feet and into the earth to be revitalised. Black tourmaline contains iron

In addition to the general properties of tourmaline, indicolite (blue tourmaline) activates the Throat, Third Eye and Crown Chakras, aiding both communication and psychic awareness. It is particularly good for treating illness involving the throat. It can facilitate communication with Spirit Guides and the Angelic and higher realms, as well as the ancestors and ancestral knowledge. Blue tourmaline bestows a ‘light heart’, and can also be used to strengthen the immune system and treat thyroid dysfunction. Indicolite contains lithium

Like all tourmalines, dravite (brown tourmaline) is a powerful healer. It aligns with the Earth Chakra, and is ‘earthing’ rather than ‘grounding’. It also has a strong effect on the Solar Plexus, and opens and strengthens the Sacral Chakra, giving a sense of inner strength and empowerment. It gently balances and clears all the chakras, and once cleared, draws the energy down and anchors it firmly in the Earth. It can be used to calm an overactive pineal gland, and calm the mind in general. Gienger recommends it to heal family dysfunction and instil a feeling of community. Chemical formula: Dravite contains manganese

Verdelite (green tourmaline) is one of the most powerful healing and detoxifying crystals, and possesses a strong mood-lifting effect. It supports and strengthens the immune and lymphatic systems. It has a strong connection with both the Heart and Third Eye, and can aid psychic awareness and astral travel. A natural green tourmaline wand can be used to direct energy when treating an injury or illness, and also for guiding energy in a crystal layout. When directed at a specific area, it first removes any unwanted (stagnant) energy from the site, then sends healing light into the affected area, without the practitioner’s active intervention. Dark green tourmaline has the ability to make one feel grounded and protected while at the same time being open, especially at the Heart. As such it can aid meditation and self-healing. Verdelite contains lithium

Rubellite (pink tourmaline) is a powerful healing tool. It brings energy up from the Solar Plexus to the Heart and beyond to the Throat Chakra. It gently opens, cleanses, calms and ‘lights up’ the Heart Chakra, and acts as an anti-depressant. It can be used to release the emotions attached to an illness or injury, especially if held on or near the affected area. It has a balancing effect on the endocrine system, especially the thyroid. As with green tourmaline, a terminated rubellite crystal makes a fabulous wand. It removes any unwanted (stagnant) energy from the site, then sends healing light into the affected area, without the healer’s active intervention. The deep red variety can be used in psychic development, as it helps to open and cleanse the Third Eye, and is also useful in trance work. Personally, I wear rubellite directly over my heart when trying to keep my heart open after an unpleasant experience. It helps lighten my mood and reminds me to feel compassion towards others, even those who have hurt me. I also place it directly on the Heart Chakra in treatment, especially when the client is in the final stages of recovery from past abuse or a similar issue. One small word of warning, however: worn for a long period, rubellite can take you so far into compassion that you become highly sensitive to the world’s sadness. Rubellite contains lithium

Watermelon tourmaline (pink centre, green outer coating) helps to combine spirit, soul, intellect and body. It encourages creativity and imagination, and stimulates and balances the immune system, making it one of the best crystals for use in the treatment of ME, chronic fatigue syndrome (CFS), and similar diseases. In this case, it should be worn for long periods. Watermelon tourmaline contains lithium

Multi-coloured elbaite carries the energy of all colours of tourmaline. It is balancing, and is an exceptional healing crystal for general purposes. Elbaite contains lithium

Tourmaline is the name for a group of related borosilicates with complex and varied composition. The best crystals are found in pegmatites and metamorphosed limestones which have been in contact with granite magma. Each variety has a slightly different chemical formula. It usually forms long, thin prismatic crystals with a triangular or hexagonal cross-section, frequently coming to a three-pointed termination. Its piezoelectric qualities make it an important mineral in industry, where it is used in pressure devices, such as depth sounding equipment, and in optical devices for polarising light. The general name for the main coloured gemstone variety is elbaite (for the type locality in Elba, Italy). Elbaite displays visible pleochroism (colour changes depending on the direction of view) and strong colour zoning, and may have different colours from one end of the crystal to the other – or, more dramatically, one colour through the centre with an outer coating of an entirely different colour. An example of this latter type is watermelon tourmaline, which has a green outer coating and pink centre. Also common is a black outer coating with a green centre (sometimes referred to as dark green tourmaline).

History and Tradition:
Tourmaline was first reported by Christianus-Fridericus Garmann in 1707. The name “tourmali” was a generic name used in Ceylon (now Sri Lanka) for coloured gems, mostly zircons. Around 1703, it had been discovered by Dutch lapidaries that some of the ‘zircons’ arriving in the Netherlands were actually a previously undescribed mineral. Several names were given to the new mineral, including “Pierre de Ceylan”, used by Lemery in 1717. “Tourmalin”, as a more or less specific mineral name, was used by Rinmann in 1766. Hill called it “Tourmaline Garnet” in 1771; and Richard Kirwan shortened the name to “Tourmaline” in 1794. Information from MinDat 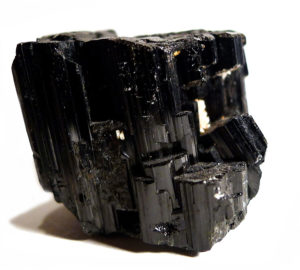 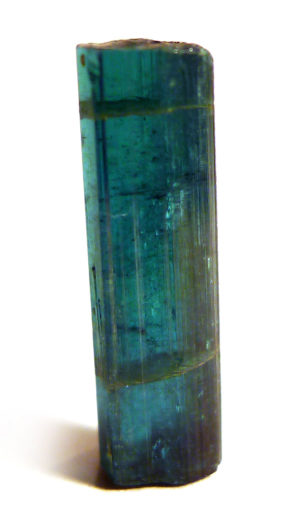 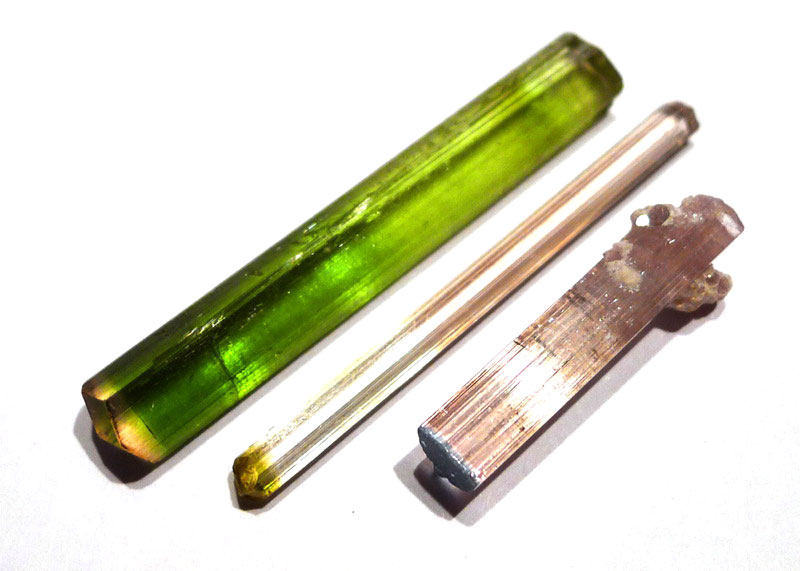 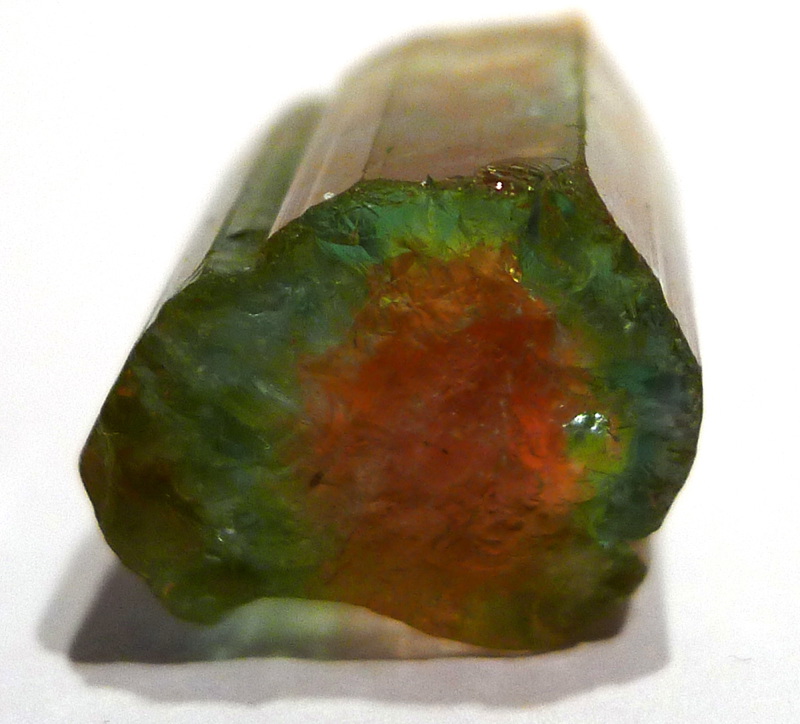