Properties:
Howlite is associated with purity, and its soft energy gently cleanses and aligns the chakras (an attribute it has in common with other boron minerals), with an emphasis on the Crown. It has an ‘inner-outer’ quality that encourages communication on many levels, including higher communication, and non-violent communication. In the latter case, it allows us to see the other person’s point of view and approach discussion with a calm, clear head, often revealing a way to meet both party’s needs. Many find it very calming, and it is sometimes recommended as an aid for sleep.

Special Handling: Howlite is porous, so easily absorbs dye, and soft, so may be easily scratched, or dulled over time if carried with other crystals. There are no health risks associated with this mineral.

Mineralogy:
Howlite forms as nodular masses, with crystals occurring very rarely, and is usually found in association with other boron minerals. It is almost always sold as a polished or carved mineral, and is white with grey marbling. Natural howlite is nearly always white, but it is frequently coloured to imitate other minerals, particularly turquoise. Although the hardness is 3.5, this represents the separation between the grains; in the rare instances howlite forms crystals, the hardness of the crystals is 6.5. Howlte is easily fusible.

History and Tradition:
Named after Henry How of Nova Scotia (1828 – 1879), Canadian chemist, geologist, and mineralogist, who first described it. Because of its relatively recent discovery, there are no traditions associated with this mineral. 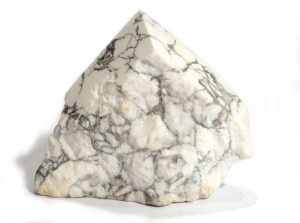 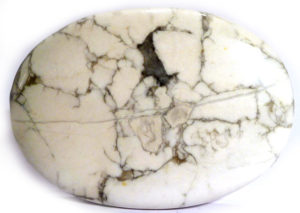 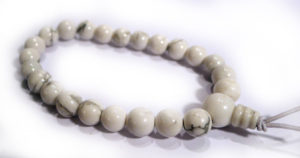 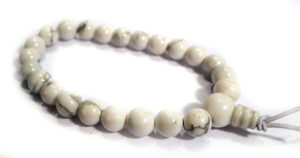 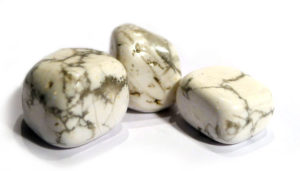