Properties:
Galena proves that you can’t judge a book by its cover. Galena clears and aligns all the chakras, from the Root through to the Crown, releasing anything that is stagnant or not needed. It leaves us feeling both physically and mentally calm and neutral, and the body almost weightless, without any sense of fatigue. It is a lead ore, and therefore heavy, and the crystal system is cubic, representing Earth, making it a good candidate for a grounding mineral. At the same time, its silvery colouration creates an alliance with the Crown Chakra, so it can be used to clear and open the Crown and connect with Source, while remaining firmly in the body. The lead content provides a shielding effect to help alleviate electromagnetic stress. There are many lead ores, most of them colourful and translucent. Galena most closely resembles the colour of the lead, and can represent the base metal with which we begin a transformational alchemical process, the spiritual journey towards becoming pure gold. In tarot, this is represented by The Fool, about to take his leap of faith, symbolising the first stage on the Soul’s Journey.

Mineralogy:
Galena is the primary ore mineral of lead. Worked for its lead content as early as 3000 BC, it is found in ore veins with sphalerite, pyrite, chalcopyrite, fahlore etc., skarns, and in sedimentary rocks as beds or impregnations. It often contains small amounts of silver, copper, cadmium, zinc, arsenic, bismuth and antimony. The Romans were successful in removing the silver content. The crystals are bright when fresh but often receive a dull tarnish after exposure to air.

History and Tradition:
Named by Pliny the Elder in 77-79 from the Greek “galene” meaning lead ore. Lead beads have been found in Turkey dating to 6,500 BC, making it possibly the earliest metal to be smelted. Although mined and used industrially (for water pipes and cooking pots), lead minerals were rarely used in traditional medical practice. The exception is ancient Egypt, where galena was ground up, mixed with honey and other ingredients, and taken as a general remedy. Ground galena was also one of the powders used as khol, or eye shadow. 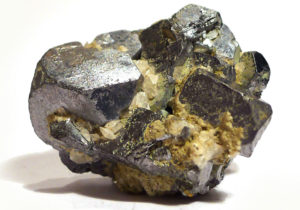 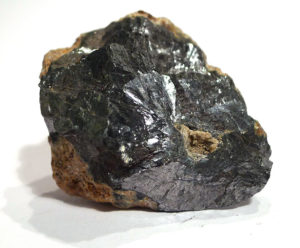 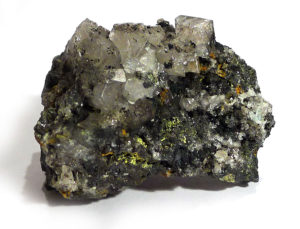