Properties:
Just the sight of dioptase’s extraordinarily bright green colour can lift the spirits, making it an excellent antidepressant. It is balancing, detoxifying, and stimulates the immune system, encouraging us to embrace health fully and continue to heal. It can alleviate headache and nausea, and be an aid in pain relief. It balances and aligns the chakras, and helps disparate energies to coalesce and work in harmony with one another; so, for example, if you are working on a project and keep getting distracted by new ideas, or if you are a ‘blue sky’ thinker with lots of new concepts and no follow-through, this could be the crystal for you. Spiritually, it clears and opens both the Heart and Upper Heart Chakras, and allows us to feel love and compassion on the highest level, even for our enemies. Its message is so powerful that it can stimulate the Heart from a distance, such as when it is placed on an altar a metre or more away. Clear examples are weakly pleochroic (display a slight colour change depending on whether it is viewed in natural or artificial light). This symbolises dioptase’s interdimensional quality, allowing us to work on a higher level while remaining in contact with our physical selves.

Mineralogy:
Dioptase is relatively rare, and was often mistaken for emerald in the past. If it wasn’t so soft, it could easily be a rival for emerald in high-end jewellery. It forms when copper veins have been altered through oxidation, with bright emerald-green modified rhombohedral crystals, usually only a few millimetres in size, which form either as individuals or as a ‘druse’ over the host matrix. Occasionally, crystals are up to 5mm; rarely, up to 10mm Good specimens are very expensive, so although a wonderful mineral for therapeutic and personal use, it is not considered necessary for the therapist’s toolbox.

History and Tradition:
It was named in 1797 by French mineralogist René Just Haüy, from the Greek for “through” and “to see”, in allusion to its clarity and the visibility of internal cleavage planes. There are no ancient traditions associated with this mineral. 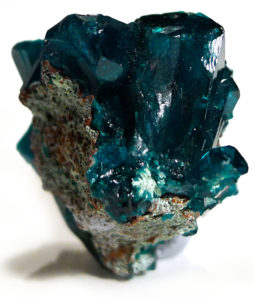 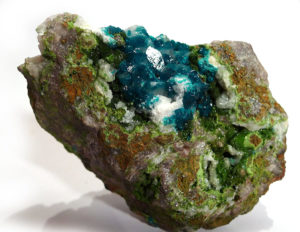