Properties:
In spite of its alignment with the Sacral Chakra (which we usually associate with fire, motivation and energy), copper can be very grounding and soothing. It balances, calms and regulates the body’s electrical impulses, as well as earthing excess electromagnetic radiation picked up through use of electronic equipment such as computers. Copper is often used as an anti-inflammatory in the treatment of arthritis, physical trauma and structural pain (such as lower back pain), plus it helps to reduce fever, and eases the pain and discomfort of irritable bowel syndrome (IBS). It supports the immune system and strengthens the body’s ability to fight infection. Copper can be used to direct and amplify healing energy, and help us release unwanted anger (when we are emotionally inflamed!). Dendritic native copper appears to form a framework or structure for its work, allowing it to spread its current throughout the physical and energetic body. It is pliable and ductile, symbolic of an ability to bend without losing strength or breaking, and can remind us that we can become more pliant and let go of rigidity in our thoughts, beliefs and the way in which we interact with others, without losing our integrity and inherent strength.

Copper conducts heat. This quality has led to its use in bracelets for the treatment of arthritis, the idea being that it will conduct away the heat of inflammation. Studies are inconclusive, but many users are convinced it works. Copper and copper ores such as malachite are still used as anti-inflammatories in modern crystal therapy. Copper is also an excellent conductor of electricity (second only to silver), and for this reason copper tubing and wire can be employed in making wands, with the intention of directing, transmitting and amplifying energy. Copper, malachite (copper ore), and copper alloys are naturally bacteriostatic. In Ancient Egypt, malachite powder was used to prevent and cure eye infection. As with silver, numerous efficacy studies have been carried out over the past decade or so, showing that its antimicrobial properties extend beyond bacteria to some viruses and fungi. This quality is now recognised and embraced by the medical profession, and the Environmental Protection Agency (US) has approved a long list of touch surfaces to prevent the spread of infection, such as bedrails for hospital beds, door handles, grab rails on public transport, etc.

Mineralogy:
Copper occurs in the oxidation zone above sulphide copper deposits, in basalts, sedimentary rocks (known as “red bed” deposits), and rarely, in meteorites. It is usually found as massive aggregates, but can crystallise into well-formed cubes and dodecahedra, and is also found as dendrites (tree-like shapes).
Copper is used widely in industry, including electrical conduction and water transport. Its alloys, brass and bronze, are very important, and it is also used in coins and gun metal.

Copper is an essential trace element in the human body. It is the key component of redox enzymes and of haemocyanin. In addition, it is naturally antimicrobial, and recently copper alloys have been used in hospitals on door handles, door plates, and bedrails to help prevent the spread of MRSA and other infections.

History and Tradition:
In antiquity, the main source of copper in the Western world was Cyprus. The ancient Greeks called it chalkos, while the Romans referred to it as aes Cyprium, “aes” being a generic term for copper alloy, and “Cyprium” meaning “of Cyprus”. Cyprium evolved into cuprium (hence the chemical symbol Cu), which later became the English “copper”. Copper is considered to be one of our most important metals, and has a history of human usage rivalling that of amber. Native copper has been in use for at least 10,000 years. Earliest estimates place its discovery at around 9,000 BC. A copper pendant was discovered in what is now northern Iraq that has been dated to 8,700 BC. There is evidence of copper metallurgy, including smelting, in southeastern Anatolia (Turkey) from around 7,500 BC (Neolithic period). Malachite mines (malachite is an important copper ore) in Sinai date to around 4,000 BC, and the Great Orme Mine in Wales is a well-known example of Bronze Age malachite mining in Britain. There are examples of polished copper mirrors from Mesopotamia from around 4,000 BC. The smelting of copper was independently discovered in China around 2,800 BC, and around 1,000 AD in the Americas, specifically Peru. The revelation that copper could be used as an alloy to create bronze and brass changed human history and heralded the Bronze Age. Egyptian copper artefacts date from 3,000 BC, and the Egyptians used malachite medicinally from at least 1,800 BC – probably much earlier. In antiquity, copper was associated with Venus/Aphrodite, and later, in Mediaeval Europe, the alchemical symbol for copper was the symbol for Venus (known as Venus’s Hand Mirror). There are more recent traditions around copper, which are discussed in the Healing Properties section. 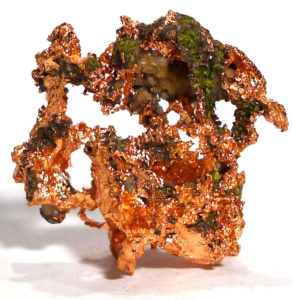