In addition to the general properties of chalcedony, chrysoprase is profoundly mood-lifting, cheering, supportive, and healing for the spirit, so makes an excellent ally in times of depression or sadness, and when coping with the darker, more challenging periods of life. It can help us to let go of anger, and focus on the positive, rather than being overwhelmed by the negative, reminding us of what we have to be grateful for – definitely a ‘glass half full’ sort of crystal. Melody recommends it for acceptance and self-acceptance, as well as for healing the physical and emotional heart. It is also highly detoxifying, and can be used to balance and support the immune system. Gienger suggests it for elimination of toxins and heavy metals. Traditionally, it was used to treat gout and epilepsy, and improve eyesight. Chrysoprase is strongly connected with Gaia and the natural world – one friend describes holding it as “getting a hug from Mother Nature”. Nature spirits are attracted to it, making it very useful when working with nature energy or the Fairy realm.

Mineralogy:
Chrysoprase is a translucent bright apple green chalcedony, its colouration due to the presence of nickel. It is the rarest and most valuable of all chalcedonies, and at one time was often mistaken for jade. Clear or white chalcedony is frequently dyed green and sold as chrysoprase. Recognition of dyed chalcedony is fairly easy, as the colour is too dark and even to look like the real thing.

History and Tradition:
The name derives from the Greek khryso prasos, meaning “golden green”. Chrysoprase has been known for thousands of years, but does not appear to have been used for many talismanic or healing qualities until, at the earliest, the Middle Ages. It is mentioned once in the Bible, by the apostle John, and is listed as the tenth foundation stone of the New Jerusalem in the Book of Revelations. In his 14th century treatise Lapidaire, Jean de Mandeville states, “It is hard to find and gives graces to he who wears it, and it is good for the eyes.” Camillo Leonardo agreed with the last statement, claiming, “Its principle virtue is to cherish the sight.” Hildegard von Bingen (12th century) held it in high regard. She recommended it in the treatment of gout by placing it directly on the skin in the affected area, and said it would calm anger and angry words by placing it on or near the throat. She also suggested its use in clearing poison, preventing epileptic seizures, and in cases of possession, to weaken demons so they are easily cast out or leave of their own accord. 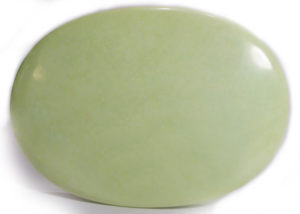 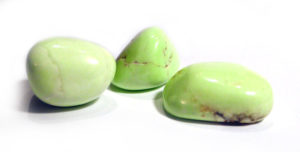