Properties:
Carnelian has a dual nature, being dynamic, fiery, and passionate, while also having the ability to calm, ground and protect. It bestows optimism, courage and inner strength. Carnelian, especially when used in combination with orange calcite, provides an amazing antidepressant, through either carrying the stones, drinking an essence, or spraying the essence in your environment, and can alleviate Seasonal Affected Disorder (SAD). It is also useful in the treatment of Irritable Bowel Syndrome (IBS) and other issues affecting the bowel. With IBS it works in two ways, as not only can it help to sooth the irritation, but it also helps us to centre ourselves, ground spiritual energy, and find the stillness inside, allowing us to be more contained and less open and vulnerable to outside influences (being too ‘open’ is a major cause of IBS). Carnelian improves the libido, and can be used to treat female reproductive system issues and illness, including infertility and excessive or abnormal bleeding.

One of my teachers was so taken with carnelian that he referred to it as the “thinking stone”, and insisted on using it whenever he used crystals in combination, whether in layouts or essences, as he believed it helped the other crystals to communicate with one another and work together. Some crystal therapy training and books say that carnelian is self-cleansing. This has not been my experience, and I recommend you cleanse it as you would any other crystal.
.

Mineralogy:
Carnelian is a cryptocrystalline chalcedony with translucent orange colouration, due to the inclusion of iron oxide. The best natural carnelian has a cloudy distribution of colour, often with some areas more translucent than others. Banded varieties are known as carnelian agate, but this name is sometimes applied to grey agate that has been dyed orange-red (a common practice, unfortunately). Brown carnelian is known as sard (as in sardonyx). When carnelian occurs with brown or dirty-yellow areas, it is often heat-treated to alter the colour, making it brighter and more consistently orange. When mined in India, carnelian is brought to the surface and left in the sun to brighten. I love the idea of bringing sunlight into the crystal, especially when it is one used to treat depression and Seasonal Affected Disorder (SAD). It has been, and still is, a popular mineral for jewellery. Clear or white chalcedony is often dyed and used as ‘carnelian’ in jewellery. As with chrysoprase, it is easily recognisable by its even and over-bright appearance.

History and Tradition:
The name is derived from the Latin corunum, in reference to its resemblance in colour to the cornel berry or cornelian cherry. The spelling change dates to the 15th century, when there was a mistaken belief that the origin was the Latin carneolus, meaning “flesh”.

Carnelian is first mentioned in the Egyptian Book of the Dead (Chapter 156). Words from this chapter were carved into a protection amulet, and placed against the neck of the deceased. The same was done with content from Chapter 29, with the recommendation that the stone be carved into the shape of a heart. Carnelian was also carved into a scarab with the name of the deceased on its underside. The fact that wax does not easily stick to it resulted in its use in Egypt for carved cylinder seals. Amulets of carnelian have also been found in Iron Age graves in Japan.

Carnelian was recorded as the first of the twelve stones in the Breastplate of Aaron (the high priest of Israel) in the Book of Exodus, and represented the tribe of Reuben. It is said that the children of Israel carried carnelian with them out of Egypt, which they carved into amulets.

Traditionally, Arabic peoples also valued it as an amulet against envy (as in preventing the ‘evil eye’). It is said Mohammed wore a silver ring with a carved carnelian seal, and it is believed that any person who wears a similar ring cannot be separated from God. Jafar (one of the most famous imâms) declared that, if a man wore carnelian, all his desires would be gratified.

Carnelian’s occurrence is widespread, as is its use as an amulet and healing stone. Buddha is said to have offered a carnelian vase to one of the four Kings of Heaven. Aboriginal men in Western Australia wear it to cure all ills. Zulus say that anyone wearing carnelian will be protected against falling walls and collapsing houses – a belief often attributed to turquoise. Interestingly, this belief also occurs in European and Native American folklore. Carnelian has long been believed to staunch the flow of blood, and Arabs carve it into toothpicks to prevent bleeding gums. Members of the Bgai tribes of Burma (Myanmar) carve it into fetishes, which are fed blood.

There are a number of references to carnelian in Mediaeval, Renaissance, and later lapidaries. In the 12th century Hildegard von Bingen described making an essence using carnelian and wine, which is then drunk to stop nosebleed. She finds more uses for sard, including curing diseases of the head, deafness and jaundice, and as an aid in childbirth. The Book of Wings by Rabbi Ragiel (13th century) suggests its use to staunch blood flow and grant honour to its wearer. Jean de Mandeville, in his 14th century poem Lapidaire, recommends it to bring peace and honour, to restrain the flow of a woman’s bleeding, and to appease anger and enemies. This was echoed by Camillus Leonardus in the 16th century. The Lapidario of Alfonso X (1881) recommends it for confidence and courage in public speaking (for “weak voice and timidity in speech”). It is still used to grant strength and courage. 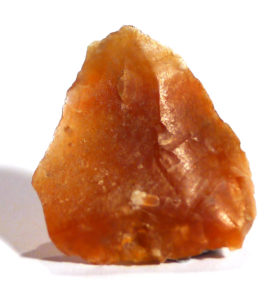 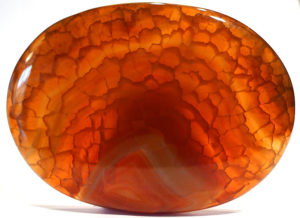 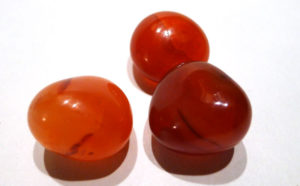 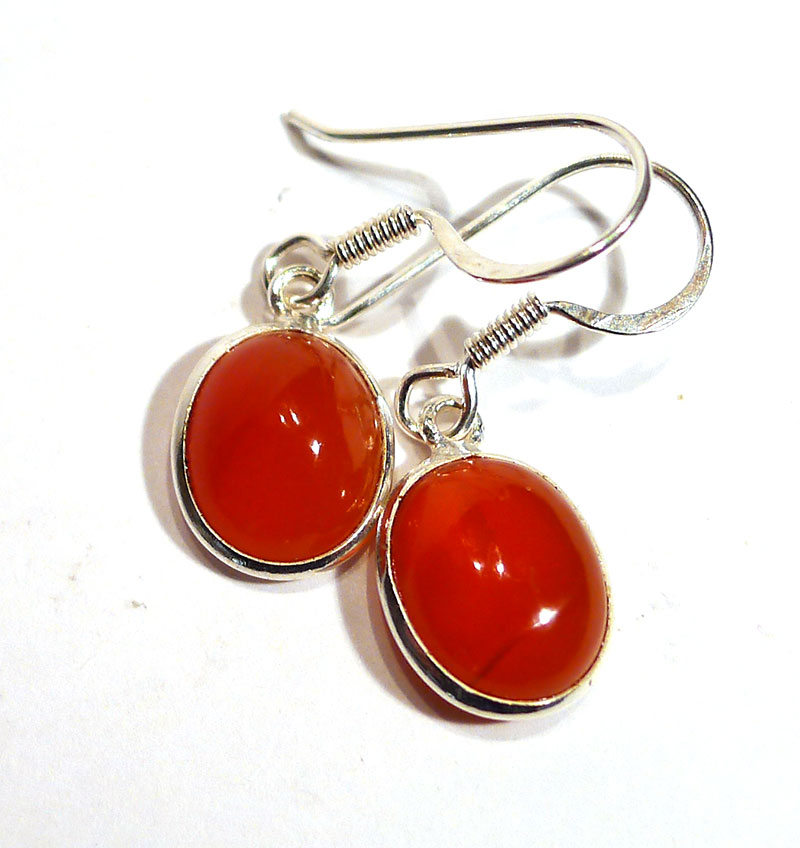 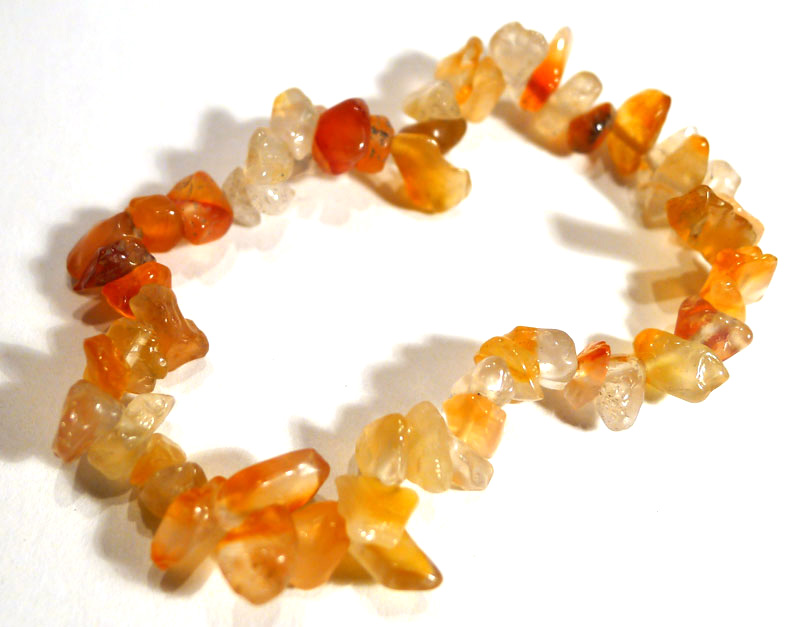 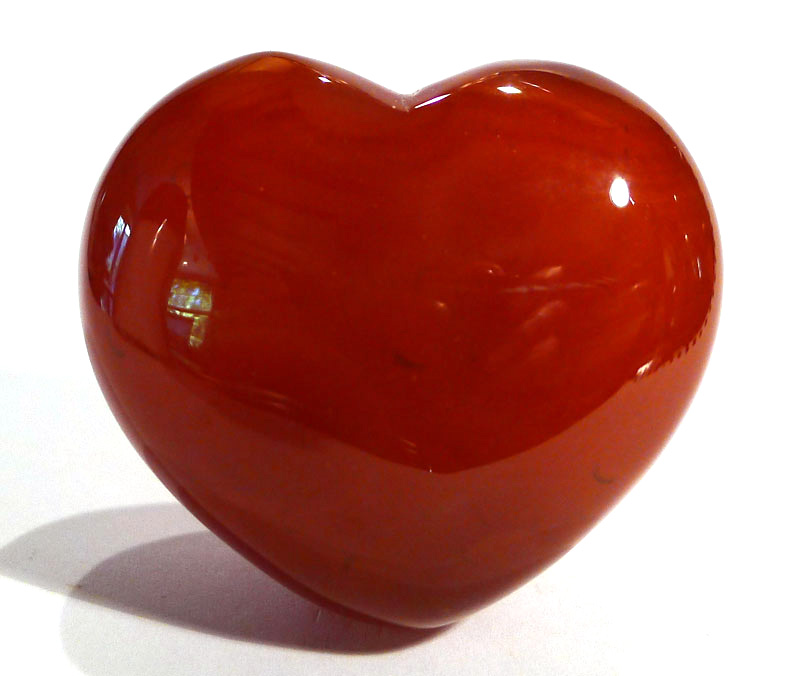 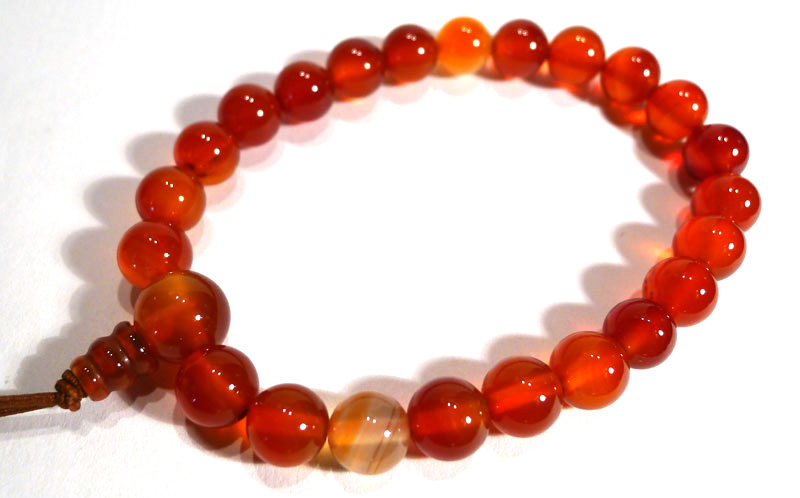 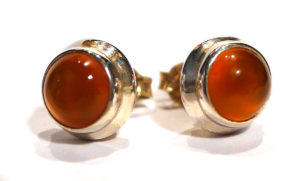 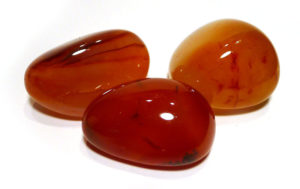 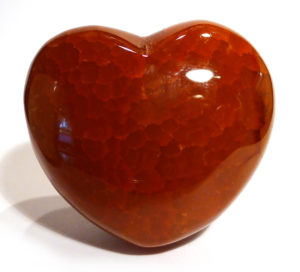 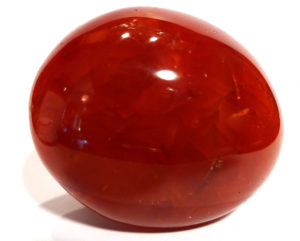 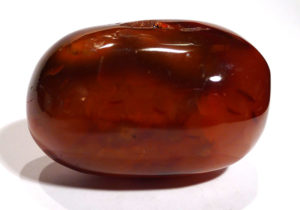