Mangano calcite is a soft and gentle Heart stone. It is a good support after emotional trauma, as it teaches us to forgive, and allows us to let go of grief and move on. It is also a celestial communication stone, connecting with the higher (Angelic) realms through the Heart. Children are especially attracted to this one.

In an interesting aside, trilobites (one of the earliest known groups of arthropods, which exist in the fossil record from the Early Cambrian period, 521 million years ago, until they became extinct 270 million years later), have complex compound eyes with lenses of clear calcite.
Mangano calcite is a layered calcite originating from Peru. Colouration is pale pink, due to included manganese (hence the name), which is often layered with white. 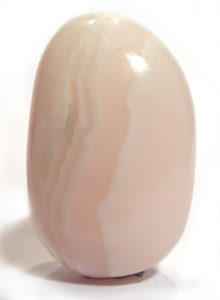 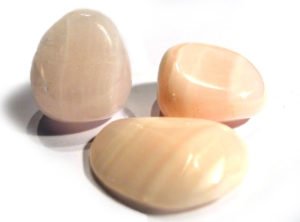