Properties:
Bloodstone is profoundly calm and tranquil, clearing and balancing on many levels, including the energetic, hormonal, and emotional. It then focusses its gentle energy on the Heart and Upper Heart Chakras, and earths the energy. Carrying, wearing, or meditating with the mineral will bring a sense of womb-like safety. It releases stress and anxiety, detoxifies, and supports the immune system, making it a good stone for treating infection and contracted illness, as well as autoimmune and immuno-deficiency diseases like ME/CFS. It supports and clears the filtration organs, especially the kidneys, and is still used to treat haemorrhage and nosebleed. I understand that some crystal therapists are using bloodstone to support and rebuild bone marrow function in leukaemia patients.

Mineralogy:
Bloodstone (also known as heliotrope) is a dense, dark green variety of chalcedony with bright red jasper patches spread throughout the mass. Red colouration is due to traces of iron silicates, while the green is from included chlorite and/or hornblende. It has long been a popular mineral for carvings and jewellery, particularly men’s signet rings.

History and Tradition:
So named because of the flecks of red jasper, and not to be confused with the translation of hematite (literally blood stone). The ancient name was heliotrope, from the Greek for “sun-turner”, in reference to the belief that it would alter the colour of the reflected rays of the sun. This belief was expanded upon by Damigueron in the 2nd century BC, who claimed it would not only turn the sun red, but was so powerful it would provoke storms. He also claimed it to be a preserver of health and protector against deception. It is mentioned as an amulet in the Leyden Papyrus (end of the 3rd century AD), saying that the wearer will be given whatever he asks for, assuage the wrath of kings and despots, and will always be believed. In the Middle Ages it was said to render the user invisible when rubbed with juice from the herb heliotrope. Up until the 16th century it was widely used to staunch nosebleed, and internal and external haemorrhage, usually by cooling the stone in water first. In the Christian tradition, bloodstone symbolises the blood of Christ, the legend being that drops of His blood were splashed on the stone. 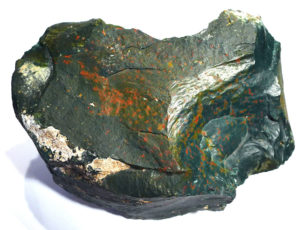 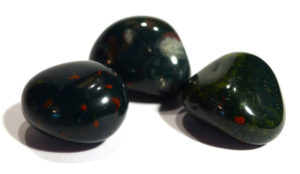