Properties:
Baryte’s primary gift is expansion (as in inner expansion), often followed by release. Most of us will hold stress, old trauma, or even over-thinking ‘monkey mind’, as tight little bundles of tension within the body or mind. Baryte can relax the over-wound mechanism. The colour will have a direct bearing on where this expansion takes place, so each variety of baryte has its own unique qualities.

Blue baryte brings calm serenity in times of stress, and spreads warm energy throughout the body, as slowly and inexorably as lava, helping us to release held tension, and bringing a sense of inner expansiveness. It is a general balancer, especially for the pituitary, which in turn is the master regulator for the endocrine system. It cleanses, clears and opens the Throat Chakra, aiding communication on all levels. It also facilitates spinal alignment from the base of the spine up, straightening and elongating the mechanics of the body, so you feel you are ‘standing tall’. This effect is most powerful at the top of the cervical spine (neck), just beneath the occipital bone at the base of the skull, where in addition to supporting the physical body, it also clears and strengthens the body/brain connection. Used as a cluster, the inner expansion is so powerful, that it feels as if a flower is opening in the upper torso. Similar to epidote, clusters of blue baryte have strong energy, and should only be used for relatively short periods of time. Blue baryte from Morocco is less dense than the US version, with a lighter, clearer energy. Though it doesn’t have such a strong effect on the lumbar region of the spine, it still influences the cervical spine and adds a clarifying quality to the body-brain connection.

Clear baryte relaxes the over-active mind, and allows expansion to such an extent that, if followed through, the user will find the void beyond time and space. This sounds lovely, but you still need to function here on Earth, so I recommend using clear baryte only for short periods of time, followed by a grounding crystal such as a pyrite cube. Once back on planet Earth, you will find the mind is clearer and less busy and cluttered, which will aid the decision-making process, and help you to see the way forward.

Honey Baryte (he gold, honey-coloured to olive green baryte from China) focuses straight on the emotional heart, expanding the Heart centre and gently releasing old, held emotions. When holding or meditating with green-gold baryte, whatever is released feels as if it expands outwards away from the body and simply dissipates. But when working with a client, it feels more likely it is clearing downwards through the legs and into the Earth, leaving the client feeling much more present in the body. This release and clearing goes further, helping to eliminate the energetic effect of drugs from the body, and is especially helpful when working with a client who is trying to overcome addiction, or on prescription pain medication or antidepressants that tend to cloud energy and block treatment.

Baryte Rose’s energy is soft, gentle, and friendly – I’ve heard it described as like a small, friendly animal. Its terracotta colouring aligns with the Sacral and Root Chakras, and as expansion takes place in these centres, any release flows down the legs and is discharged into the Earth. It has a playful quality, and can be used to attract and communicate with nature spirits. Desert Rose also occurs in gypsum, which has different qualities. Gypsum is much lighter than baryte, and Mexican baryte rose is a terracotta red (as opposed to the whitish gypsum desert rose), which can aid recognition.

Mineralogy:
Baryte is a common accessory mineral in lead and zinc veins, and is also found in limestone, marine deposits, and cavities in igneous rocks. It is the primary ore for barium, making it economically important, as it is used as drilling mud in oil and gas production, a filler in paper and cloth, an inert body in coloured and white paints, and in medicine for imaging the gastrointestinal tract (barium meal).

Baryte occurs in a wide variety of habits, including tabular and prismatic crystals, and cockscomb aggregate. It is typically found as thick to thin tabular crystals, usually in clusters with the crystals growing parallel to one another, or nearly so, and also as bladed, white masses. It is surprisingly heavy for a non-metal, and would make a beautiful gemstone if it wasn’t so fragile. For the same reason, it is never polished or fashioned.

History and Tradition:
Named in 1800 by Dietrich Ludwig Gustav Karsten from the Greek βάρυζ, “heavy”, due to its unusual heaviness for a non-metallic mineral. There are no traditions associated with this mineral. 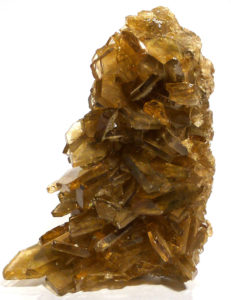 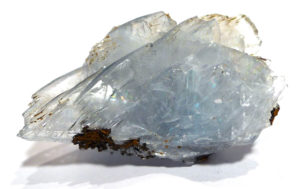 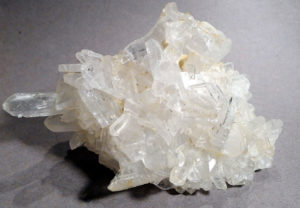 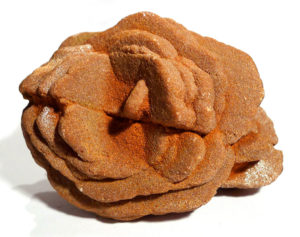 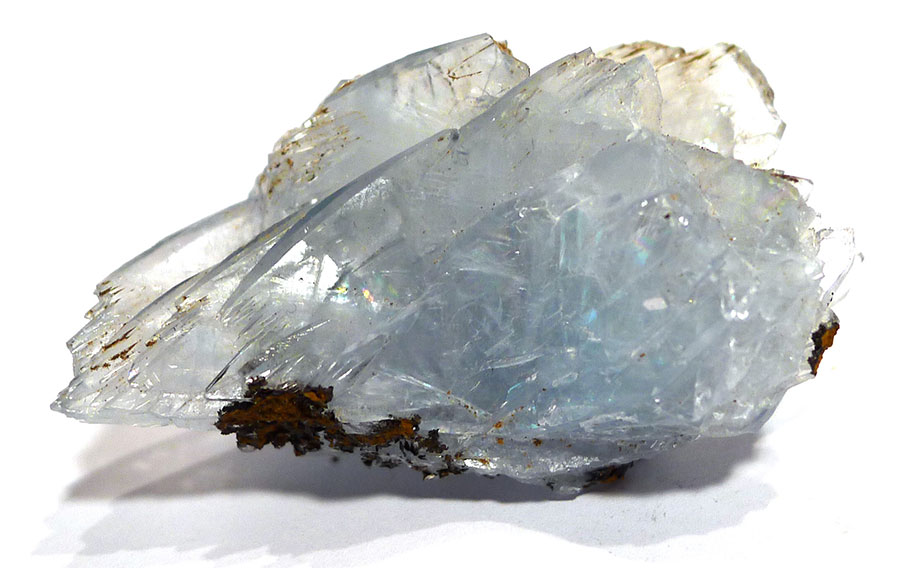 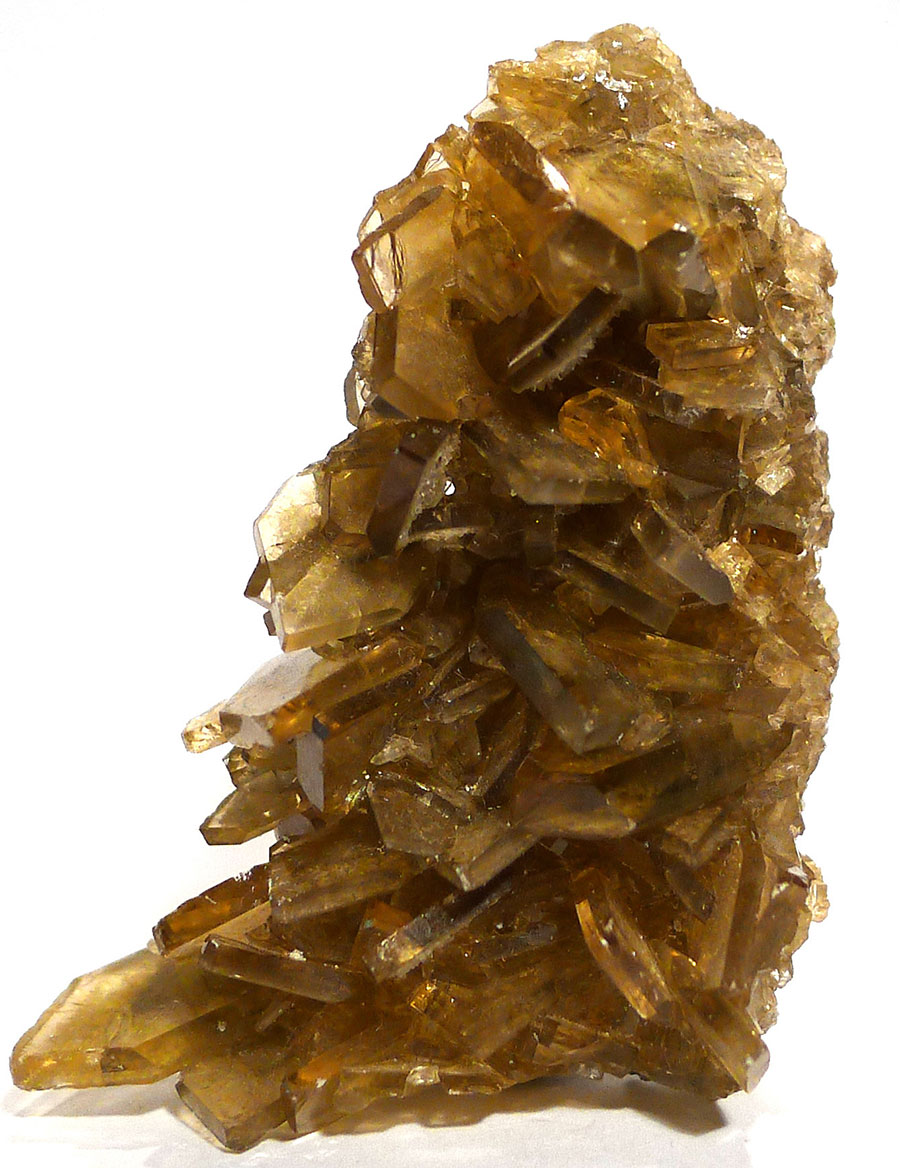 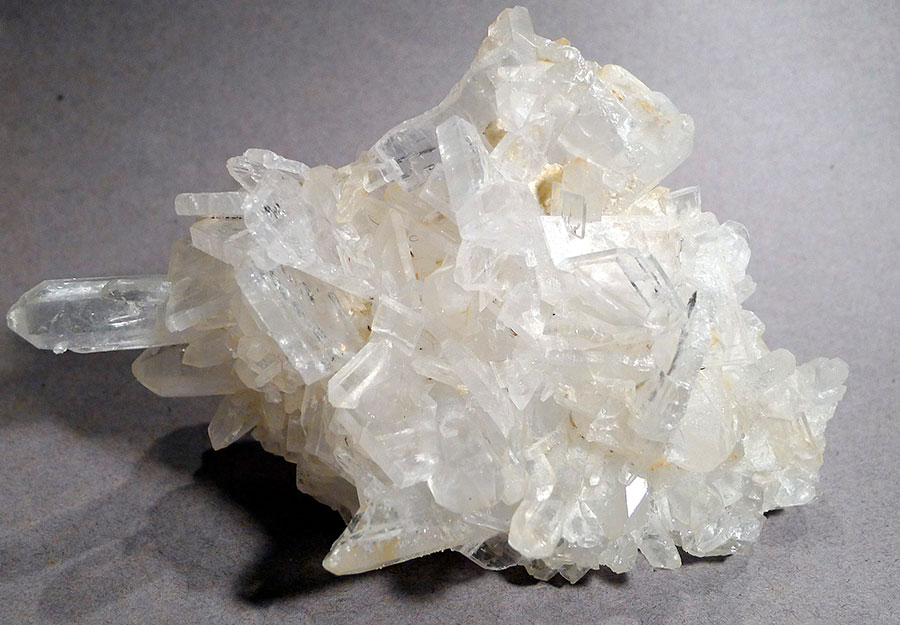