Properties:
Azurite is related to malachite, but is distinguished by its colour and lower water content. Azurite can create a strong opening of the Crown and Third Eye Chakras, facilitating and speeding up spiritual and psychic development, as well as opening the Bindu Visarga, aiding attunement and communication with our guides. It is sometimes referred to as the ‘Stone of Heaven’, and promotes awareness and self-knowledge, encouraging a quest towards enlightenment. It can help us to achieve a deep meditative state, and is useful in astral travel. It is most often used in meditation, but can be a useful healing stone, treating liver, kidney and gallbladder problems, and aiding detoxification. It is also useful in stimulating the thyroid, as well as giving insight into the cause of illness. Because of its high copper content, it is sometimes used as a mild pain-reliever.

Mineralogy:
Azurite forms as a secondary (sedimentary) mineral through the action of carbonated waters on other copper minerals in the oxidised areas of copper deposits. It frequently occurs with malachite. Crystals may be tabular (with crystals often stacked on top of one another), or prismatic (with a wide variety of faces); azurite also forms stalactitically, botryoidally, and as spherical concretions. It is chemically identical to malachite, but the copper chromophore, Cu2+, occupies different positions in the crystal lattices of the two minerals. As a result, azurite is blue while malachite is green, demonstrating a change in the wavelengths that are absorbed.

History and Tradition:
From the Persian lazhward, meaning “blue” (also the root of ‘lapis lazuli’), in allusion to the colour. Although mined in ancient Egypt and the Sinai, it does not appear to have been used medicinally, but was primarily used as a copper ore and pigment, and possibly a source of blue glaze. Azurite was used for the same purposes in Europe from the 15th to the 17th centuries. There are no healing or talismanic traditions associated with it. 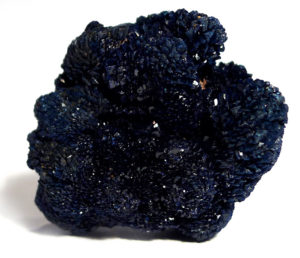 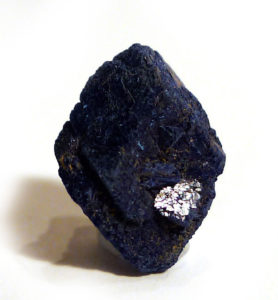 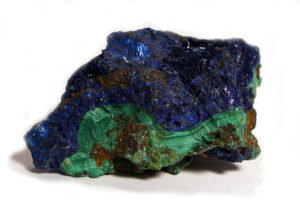