Properties: Obsidian symbolises the potential we are born with, in suspension, before it begins to crystallise through the experiences of our lives. All obsidians ground and protect, root spiritual energy, and dissolve shock, fear, pain and energy blocks. Obsidian aids inner reflection, and helps us to release addiction and other unhealthy behaviour patterns. It can elicit a paradigm shift in consciousness.

I have a large sphere of silver sheen obsidian in my treatment/teaching room, which aids transformational shifts in clients and students alike. For many, its grounding and protecting qualities are very comforting. For others there is a flip side to this stone, in that it enables us to gain integrity by allowing us to see and accept our Shadow side as it really is, helping us to become more balanced and whole. Because of this quality, it should be used with caution, and only when the user feels ready to face his/her personal darkness. Obsidian is also a useful scrying (crystal gazing) tool.

Smoky obsidian or Apache Tear usually forms as small droplets. It is translucent rather than opaque, and often occurs as nodules in matrix. In the US it is known as Apache Tears, and in Hawaii as Pele’s Tears (Pele being the goddess of the volcano). There are many variations on the Apache legend, including one account of a small band of Apache warriors fighting the US Cavalry in Arizona in the 1870s. Hopelessly outnumbered, they were driven to the edge of a cliff. Rather than face defeat, they chose to ride their horses over the cliff to their deaths. When their people heard of the tragedy, their tears fell to the ground and solidified. Smoky obsidian is used to bring comfort and acceptance to those who are grieving.

Mineralogy:
There is some disagreement regarding the formation of obsidian. For many years it was believed that obsidian extruded onto the ocean floor during an underwater volcanic eruption, and cooled very quickly, but this is no longer the opinion held by most mineralogists. There are still a number of variations on the theory of formation, but one of the most plausible is that it forms from the eruption of an unusual type of volcano, known as a rhyolite volcano. The magma in rhyolite volcanoes has a high silica content, making it viscous, which prevents the easy release of gasses. This leads to a build up of gas, usually resulting in an explosive eruption, or pyroclastic flow. Once the explosion has de-gassed the volcano, the remaining high-silicate magma extrudes slowly onto the surface, cooling quickly to form obsidian. The constituents have no time to separate out and crystallise, so technically obsidian can have any chemical composition, so long as it contains silica. Most obsidian is relatively young in geological terms, because obsidian devitrifies (minerals begin to crystallise out from the glass) over time.

Obsidian is usually black with many variations, such as smoky (Apache tear), gold and silver sheen, mahogany (red), and rainbow (multi-coloured sheen). It is amorphous (it has no crystal system), and no defined chemical composition, but instead is classified as a rock – not a mineral – containing cryptocrystalline grains of silica minerals in a glass-like suspension. In other words, it is a supercooled liquid. Rough obsidian breaks in glass-like shards (conchoidal fracture), which led to its use in early tools, particularly in the Americas. Most obsidian is available as polished or tumbled stones, rather than rough pieces.

History and Tradition:
The name comes from the Roman Obsius, who, according to Pliny, was the discoverer of a similar mineral in Ethiopia (the added “d” was due to a printer’s error in the 14th or 15th century). Obsidian has a conchoidal fracture, making it an excellent material for use in tools and weapons, and it was used as such in the Americas, where it is more common than flint. It was a symbol of the black Tezcatlipoca in the Aztec religion. Ancient Greeks and ancient Aztecs also used it for mirrors, as it is highly reflective when polished. Dr Dee (1527 – 1608, noted English mathematician, astronomer, astrologer, occultist, navigator, imperialist, and consultant to Queen Elizabeth I) apparently used a ‘black mirror’, believed to be obsidian, as one of his skrying tools. 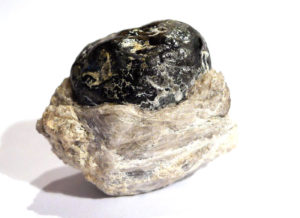 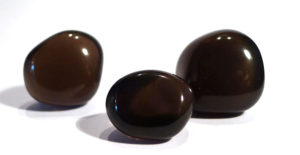 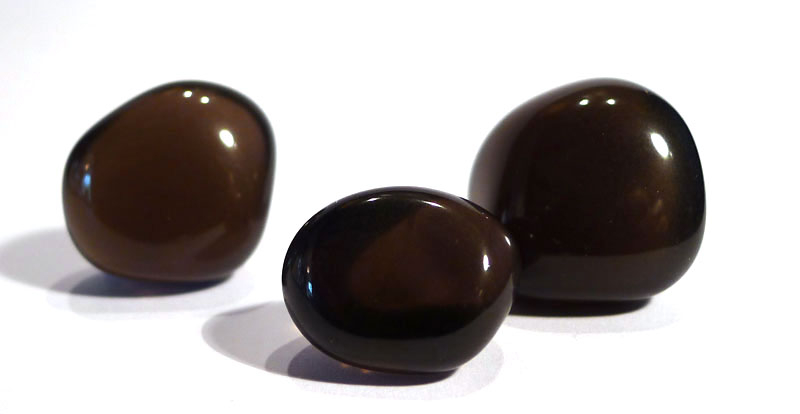