Properties:
Amber has been worn as an amulet – presumably for good luck and protection – for thousands of years. It lifts the spirits and encourages a sunny outlook with a gentle, flexible and pliant nature, combined with strength and self-confidence, making it an excellent anti-depressant for people who find other Solar Plexus and Sacral stones too powerful. It grounds higher and mental energies, so calms the mind when used in meditation, or when trying to find solutions to problems. Amber also acts as a powerful cleanser and encourages physical healing, and is used to absorb pain and clear negative or unhealthy energy. It supports the filter organs, helps with joint problems and enhances the healing of wounds. Although it aligns primarily with the Sacral Chakra, amber also opens the Crown, bringing in pure golden light throughout the body.

Amber can be used as a ‘teether’ to reduce teething pain in babies. In this case, either use a specially designed necklace for the child, or ensure the piece of amber is large enough to avoid choking. Many manufacturers recommend the child simply wear the necklace, but it was originally intended for the child to chew, and I suspect the warning is simply to avoid possible litigation if there is an accident and the child chokes.

Mineralogy:
Amber is an organic compound derived from tree resin which has undergone polymersation – a molecular change which renders it a natural plastic. It is usually found in association with lignite coal, which itself is the fossilised remains of trees. Baltic amber originates from the now extinct coniferous tree, Pina Succinifera, which existed in the Eocene Epoch of the Tertiary period, about 35-50 million years ago, and is found mainly in the Baltic region. There are a number of other deposits throughout the world which vary in age and variety of tree. In comparison with Baltic amber, Columbian amber is much younger – only 2 million years old – and comes from a different species of tree, the bean tree. In the trade, Columbian amber, along with other non-Baltic, tropical ambers from areas such as Mexico and the Dominican Republic, are sometimes referred to as ‘young amber’ or copal, the latter term being incorrect, as copal is the resin from an existing tree, Protium Copal (Burseraceae), or the copal tree, which is used to make incense. Technically, the term amber indicates a tree resin old enough to have undergone polymersation, and does not indicate a specific age, region or species. Amber has been found in Dominican Republic and Indonesia that fluoresces in UV light (see example, right), probably due to the presence of petroleum.

History and Tradition:
Amber is the earliest gemstone associated with ancient burial sites, and has been found in graves in Poland dated to the second half of the Mesolithic Period (8,000 – 5,500 BC), as an amulet often carved into animal forms. Large hoards of amber were deposited as grave goods and in sacrificial context in Denmark during the 4th millennium BC. It clearly was highly valued and was carried along ancient trade routes; it has been found in archaeological sites over a thousand kilometres from its place of origin, including Aldbourne Four Barrows, Sugar Hill, Aldbourne near Hungerford, Wiltshire – a Bronze age barrow cemetery dating from between 2500 and 1500 BC. Some archaeologists speculate that amber was believed to be a magical stone due to its ability to acquire an electrical charge when rubbed, a quality first alluded to by pre-Socratic philosopher and mathematician Thales of Miletus (c.624 – c.546 BC). In fact, the Greek for amber, electrum, is the root of the word “electricity”. Amber has been discovered in Mycenae grave goods (1600 – 1100 BC), and also in high status Roman burials, where red amber powder was laid as a ‘path’ to lead the spirit of the dead on their journey.

In ancient texts, amber was sometimes called ligure, and believed to be dried lynx urine, to which many healing properties were attributed. Theophrastus believed this was its source, although not long after, Pliny the Elder theorised that it originated from trees, partly because of the scent when rubbed. Even so, in the 12th century, Hildegard von Bingen refers to it once again as lynx urine, and suggests its use to cure stomach pain and urinary problems. There is a later reference in Arnobio’s Tesorio delle Gioie (1602) to powdered amber in a composition with a number of other powdered gemstones and animal and vegetable ingredients, as a general ‘cure all’. 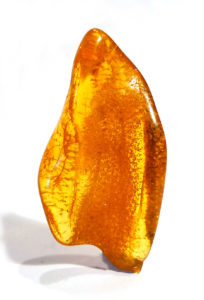 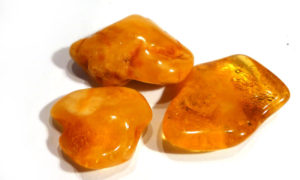