Properties:
Amazonite encourages determination and self-confidence, allowing us to ‘speak our truth’, especially in a leadership capacity – thus making leadership something to enjoy rather than fear. It frees the voice, and gives us the confidence to sing and speak in public situations. Amazonite calms while at the same time lifting the spirits, and can be used to treat depression and Seasonal Affected Disorder. It encourages a healthy trust in ourselves and trust in the Divine. As a filtering stone, amazonite helps to clear and support the kidneys and liver, and is sometimes used for protection against electromagnetic stress by placing it in front of the source of pollution, such as a computer monitor. Physically, it is sometimes used to ease cramps and labour pains.

Mineralogy:
Feldspars form an important group of silicate minerals. They are the most common minerals in the Earth’s crust, and a major component of most igneous (volcanic) rocks. There are a number of popular minerals in this group, some of which are notable for their play of light and colour, such as moonstone, labradorite and sunstone. Feldspars are usually prismatic (i.e. form large identifiable crystals), but this is rarely displayed, with the possible exception of amazonite and orthoclase. Some rock and mineral books will list all under the generic heading ‘Feldspar’, rather than listing them as individual minerals. Amazonite is a blue-green variety of microline – a potassium (alkali) feldspar. It is usually nearly opaque with little or no play of light.

History and Tradition:
Named in 1847 by Johann Friedrich August Breithaupt for an unspecified type locality area “near” the Amazon River. Microline is from the Greek for “little” and “lean”, after the two cleavage directions, which form a slightly oblique angle to one another. Because of its relatively recent discovery, there are no traditions associated with amazonite. 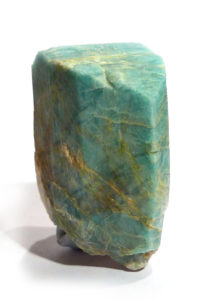 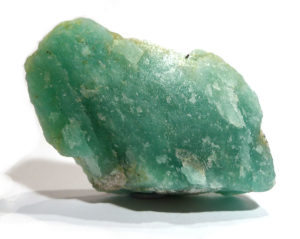