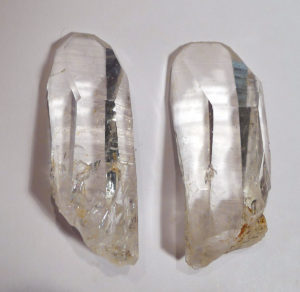 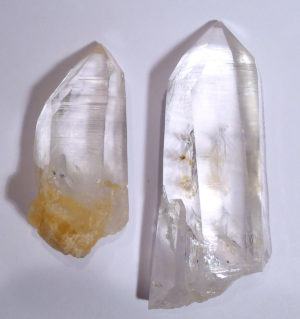 This incredibly pure and clear variety of quartz originates from the Colombian emerald mines, and bears a strong similarity to Silver Quartz (the name given to material from a small deposit discovered in Brazil a few years ago). Blades of Light is mined in three locations. The original mine is Peña Blanca, which has the clearest, and most striated crystals, that are often short and squat and look almost pyramidal. Laser crystals of the same clarity come from a nearby mine in the same area. Quartz from La Belleza are also sold as Blades of Light. These crystals tend to be smaller straight-sided or laser crystals.

This quartz is sometimes referred to as “Colombian Lemurian”. Although there are definitely similarities, including the pronounced striation, the energy and appearance are quite different from the original Brazilian Lemurian, and they do not have the frosted opaque surface, nor the coating of hematite that gives Lemurian quartz its slightly pink cast.

Although it cannot be verified, according to the Colombian miners that search for Blades of Light, it is claimed that the quartz helps to strengthen the immune system and keeps them clear of infection, so they are never ill when they are handling it. What has been noticed however, is that the mood lifts, the mind is clearer and more focused, and the sinuses are more open and breathing is easier when working with it. Similar to Silver Quartz, this quartz is very friendly, in that virtually any piece would be happy to come home and work with you. The possible exception is the short, pyramidal Peña Blanca variety, which carries an incredible mental clarity and detachment more often associated with Tibetan quartz. This shape aids decision-making, reduces mental fog, and points you in the direction of your life path. Larger lasers would undoubtedly serve well as a Control or Personal Crystal, but contain a great deal of information and insight to share with their human partner, so may be better employed in meditation. It’s possible one method could lead to the other, so that after using the laser in meditation for a period of time, it will then feel natural to attune it as a Control Crystal at a later date. Also similar to Silver Quartz, Blades of Light appears to vibrate at a higher frequency than most other quartz, and can help to attune and raise your own vibration to a level which harmonises with the new waves of energy as they come into the Earth’s field. All of these crystals are incredibly heart-centred, clarifying the energetic heart and stimulating loving consciousness, so we are better able to feel love for humanity, as well as a stronger heart connection with whatever we hold sacred or divine.

Blades of Light is becoming more difficult to get hold of, and the price has risen. Have a look at La Belleza quartz, which is similar and less expensive.