Properties:
Red zircon possesses a fiery energy more aligned with the Sacral Chakra than the Root, yet the fire is not a conflagration, but a steady, gentle warmth. It enhances alertness, while at the same time allowing the user to remain calm and neutral. It clears the heart, both physically and emotionally, helping to ease sadness, and improves general heart function and the body’s physical energy levels. In Chinese medicine, zircon aligns with the Pericardium Meridian, and is particularly helpful when used in the spring season to help eliminate stagnant liver Chi, thereby clearing anger and strengthening the ability to move forward with new projects and ideas. This meridian association means it can also be used to treat stomach complaints, chest problems and period pains, as well as calming the mind and aiding sleep. Zircon’s imperviousness to chemical and physical deterioration symbolises the strength of our core, or essence. It reminds us that, no matter how challenging life’s experiences may be, at heart we can always remain true to who we are. Gienger suggests using zircon to become detached from materialism and experience spiritual reality. He also recommends it for overcoming loss and grief.

Mineralogy:
Zircon (zirconium orthosilicate) is found in most igneous rocks and some metamorphic rocks, often in association with feldspar, garnet or monazite. It occurs as small crystals or grains, rarely making up more than 1% of the total mass of the rock. It is also found as alluvial grains in some sedimentary rocks due to its high hardness. Zircon has a high refraction index and is often used as a gemstone – colourless zircon has even been substituted for diamonds. It is often heat-treated to change or improve colour, mainly to blue – most blue and clear zircon on the market has been heat-treated. This practice appears to be ancient, dating back possibly thousands of years, and is still performed by burying crystals in sand inside a clay pot, and heating over the coals of a campfire. It is therefore speculated that zircon is probably the first gemstone to be treated in this way. Because it is resistant to chemical and physical change, it is ideal for radiometric dating of very old zircon-bearing rocks. It is the principal source of the rare metal zirconium, used to line the interior of nuclear reactors. Because of its high melting point, zircon is used to make foundry sand and other heat-resistant materials, and because of its hardness, it is also used to make industrial abrasives.

History and Tradition:
The current name originates in 1783, re-named by Abraham Gottlob Werner from the Arabic (previously Persian) azargun (zar meaning gold, and gun meaning coloured), referring to one of the potential colours of the mineral. It was originally named λυγκύριον “lyncurion” in ~300 BC by Theophrastus. Pliny refers to a mineral that may be zircon as chrysolithos in 37 AD. It was called jacinth by Georgius Agricola in 1555, and mentioned as jargon by Axel Cronstedt in 1758. Barthelemy Faujas de Saint Fond called it hyacinte (hyacinth) in 1772. There are a number of variations on these names, and hyacinth and jacinth persisted into the 20th century.

In Asia, green zircon represents the leaves of the kalpa tree, a symbolic Hindu offering to the gods.

Zircon was a popular amulet in the Middle Ages, used to protect travellers in general, and to ward against plague, wounds and injuries, and lightning strike. It was said to become dull if the wearer was exposed to plague, and was believed to be so powerful that even wearing a wax impression taken from a zircon would bestow protection. Hildegard von Bingen recommended it for clearing the eyes, as well as treating madness. Camillus Leonardus said it invigorates the heart, and disperses sorrow and imaginary suspicions. Jean de Mandeville, in Lapidaire (14th c) discussed many of the qualities previously mentioned, and stated that all colours give joy and happiness. 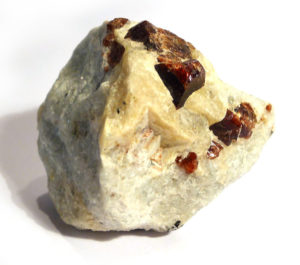