Properties:
Topaz has an interesting dual nature. Similar to beryl (although a different crystal system), all varieties of topaz have a quiet, self-contained energy when first handled, and will initially calm and centre the user’s energy, bringing it down to the Sacral Chakra. This makes topaz a useful tool for calming down and seeing clearly when there is too much external stimulation, whether the stimulation is bad or good. After handling and working with topaz for a while, the crystals often start to respond to the user, and ‘wake up’, after which their energy becomes entirely different, stimulating the Sacral Chakra and then clearing and aligning the rest of the body. This in some ways is may seem like the antithesis of the original quality, but it is at this point that the individual personalities of the different topaz varieties show themselves. Melody calls topaz a “stone of true love and success in all endeavours”. According to Gienger, it encourages us to shape our lives according to our own wishes; he also says that it helps us to become fully aware of the influence we exert based on ability, and real knowledge gained through hard work. In other words, it can help us to realise our true value, and recognise the positive effect we may have on those around us. This quality is without arrogance, and only involves a healthy dash of ego! Topaz has a remarkable realigning, harmonising and fortifying effect on the energetic body, so Chi feels almost as if it is a tangible, solid column filling the physical body. Gienger mentions its ability to stimulate energy flow through the meridians. Each colour holds the energy of a different element, so will work in a slightly different way (in this case I am referring to the Western Elements of Earth, Air, Fire and Water). All topaz, whatever the colour, is calming and fortifying, leaving the user able to think more clearly, cope better with stressful situations, and feel generally stronger and more balanced. It helps us to see our strengths and potential, especially during stressful and chaotic periods in our lives, and when we are lacking self-confidence or feeling vulnerable. Topaz leaves the user feeling present, fully in the body, and grounded, even when it aligns with the upper chakras. All varieties appear to affect the Throat quite strongly.

Most blue topaz on the market is actually clear topaz that has been irradiated. This is particularly true of the faceted blue topaz used in jewellery, which can be recognised by its stronger blue and clear sparkle – natural blue topaz is pale by comparison. Avoid buying treated blue topaz by sticking with natural uncut crystals from a reputable dealer. Blue topaz is profoundly calming. It creates the same inner harmony as other topaz, but is related to the element Air, and clears and aligns the chakras and energy bodies like a gentle breeze. It clears stagnation and encourages inner expansion, especially around the area of the upper chest and lungs, so can be helpful in the treatment of asthma. Being blue, it aligns with the Throat Chakra, though only touching it gently, so can be valuable in the treatment of thyroid disorders. As with other varieties of topaz, blue topaz works in two phases. Initially, it possesses an amazing serenity – one of my friends refers to it as “regal”. Its cool detachment calms powerful emotions and brings you into your body, so you are better able to cope with difficult, emotive, and upsetting situations. It also helps you to see your personal truth beneath the chaos. Its other dimension comes into its own while holding it for a period of time in meditation, when it suddenly ‘wakes up’ and comes to life. While not as calming to work with in this state, it is an aid in understanding the higher self and life purpose, and can also support and strengthen communication with guides, helpers and the Angelic realm. I have used it in conjunction with blue baryte to clear sadness and strengthen the will in a client in the early stages of grief, and the same combination has also been effective in the treatment of acid reflux.

Clear topaz has a watery quality that gently washes through the body as it adjusts and realigns disparate energies, leaving us working in harmony with ourselves. It strengthens Chi through the entire body, so we are less likely to be intruded on by outside energies. Clear topaz initially centres in the Sacral Chakra. When it wakes up, it stimulates and clears that chakra, then works its way up through the entire system, enlivening and aligning the chakras as it goes, until it reaches the Crown, which then opens, strengthening connection with the Divine.

Yellow topaz (also known as imperial topaz and sherry topaz) is fortifying. It has a similar harmonising effect on the energetic body as other topaz, but in spite of its fiery aspect, the action is reminiscent of tiny building blocks, stacking themselves equally on top of one another until there is a powerful and unified whole. It strengthens Chi, increasing self-confidence and self-awareness, and strengthens and invigorates the nervous system. When it wakes up, gold topaz stimulates and aligns the chakras up to the Throat, but unlike the other varieties, also stimulates the Root Chakra. It then encourages the flow of energy down the legs to the feet, and earths it.

Topaz is formed by fluorine-rich vapours given off during the last stages of the crystallisation process of various igneous rocks, particularly in pegmatites, rhyolites and in hydrothermal veins, and also in metamorphic rocks. Its perfect cleavage means it breaks easily at the base of the crystal. Topaz comes in a wide variety of colours, including clear, yellow, blue and pink, making it easily confused with other minerals. The orthorhombic crystal system can help with identification. Crystals usually form as prisms with multi-faceted ends, displaying a four-sided diamond shape in cross section. Pink and blue topaz are relatively rare. Most pink topaz on the market is in fact yellow topaz that has been heat-treated to change the colour. Most blue topaz is actually clear topaz that has been irradiated. Many crystals are marketed as topaz to add value – for example smoky topaz (smoky quartz) and Madeira topaz (citrine). Clear topaz is sufficiently refractive that when brilliant cut, it can be mistaken for diamond.

History and Tradition:
The name most likely derives from the legendary island, Topazios (now known as Zebirget), located in the Red Sea just off the coast of Egypt; although it is also possible that it originates from the word tapaz, the Sanskrit for “fire”. There is some confusion about the traditions associated with this stone, as the name was also applied to olivine or peridot (the stone mined in Topazios was most likely peridot). Pliny the Elder states that it would protect the wearer from night terrors and evil spirits. Hildegard von Bingen suggests that keeping it near will alert you if your food or drink is tainted, and also recommends its use in treating fevers, obscured vision, leprosy and problems with the spleen. In both cases the writers may have been referring to peridot. 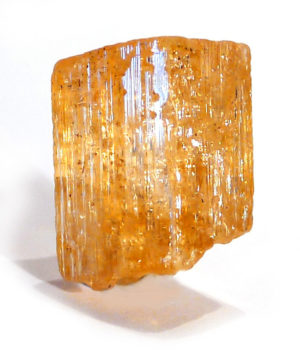