Dolerite is a plutonite igneous rock, equivalent to basalt in composition. It is fine-grained, and composed of one- to two-thirds feldspar with a silica content of less than 55%, of which quartz forms only 10%. The dolerite from the Preseli Mountains (also called Preseli Hills) in West Wales takes on a blue colour when wet, which led to its name “bluestone”.  It is generally accepted that 82 Preseli bluestones, some weighing up to 4 tonnes, were transported from the Carn Menyn (also called Carn Meinli) site in Pembrokeshire in West Wales to Wiltshire, England, around 2150 BC, to be erected during the second stage of building at Stonehenge. Controversially, some archaeologists and geologists (notably geologist and author Brian John) believe the stones were actually deposited nearer the site of Stonehenge through glaciation. Archaeological excavations carried out at Stonehenge in 2008 by Geoffrey Wainwright and Timothy Darvill exposed evidence that led them to theorise that Stonehenge was actually an ancient healing site, rather than specifically a cosmic calendar, a place of the dead, or a place of the ancestors, as previously theorised. Andrew Fitzpatrick of Wessex Archaeology said the discoveries were very important, but while the theory was plausible, it was not the only one.

The idea of Stonehenge being an ancient healing centre has led many crystal healers to look at the healing properties of the bluestone, which appears to have been the most important part of the monument, having been an early addition, and moved around several times and configured into different patterns, then eventually surrounded by the protection of the giant sarsen stones. Simon and Sue Lilly published Preseli Bluestone: Healing Stone of the Ancestors in November 2011, and Judy Hall has written about it in The Crystal Bible, vol. 2.

While I and others have picked up on its electrical properties, there is no scientific evidence to back this up at present.

Properties: Preseli bluestone has a strong connection with the electrical impulses produced by the human body, and has a particularly strong connection with the heart, the most powerful and easily measured of the many electrical centres of the body. Bluestone clears the heart centre, and strengthens the electrical workings of the heart, and improves electrical communication throughout the body, which in turn serves to balance and strengthen the immune system. The electrical connection doesn’t stop there, but helps us to link into the electromagnetic field of the Earth itself. Judy Hall and Simon and Sue Lilly take this further, suggesting that the stone taps into the energy pathways of our planet. This is not something I sensed with handling, but it would make sense, given its surprising strength and ability to tap into the electrical pathways of the human body, and also by the way it was utilised by our forebears. It is easy to understand why our ancestors may have attributed healing powers to Preseli bluestone. In addition, bluestone clears the Throat Chakra, aiding communication as well as assisting the body’s regulatory process. In Chinese medicine, it links with both the Heart and Stomach Meridians.

Basalt and other similar volcanic rocks, such as dolerite, represent our potential, and bluestone is no exception. Spiritually, bluestone can be used to strip away the layers that have shaped our personality and belief systems through environmental factors, so we are able to remember the core of who we are, and through this, open our perceptions of the world around us. By letting go of old perceptions, we may be able to see the universe in all its multi-dimensional glory.

I recommend this stone be used for personal growth, and not in treatment, unless you are experienced. Care should be taken with this mineral when treating clients with heart conditions, particularly those with a pacemaker, or who are prone to tachycardia (accelerated heart rate). It is surprisingly strong, and may have more effect than you expect. 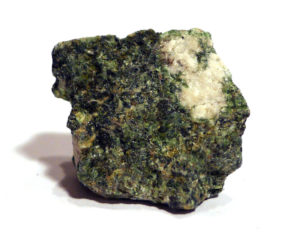