Opal is hardened silica gel. It does not crystallise, and usually contains 5-10% water. Most opals are opaque varieties  known as “potch”, which do not possess the play of light associated with precious opal.

The name derives from the Roman opalus, which is a Latinised version of the Sanskrit upala, meaning ‘precious stone’. In Elizabethan times it was known as ophthalmos (eye). Opal’s unfortunate association with bad luck did not occur until the 19th century, and probably derives from Sir Walter Scott’s novel, Anne of Geierstein. Prior to that, opal was traditionally believed to be lucky, as it was deemed to possess as many virtues as hues and colours. In the Middle Ages, it was used to treat diseases of the eye, and purported to render the wearer invisible.

Properties: Opal occurs in a wide variety of types and colours, each with its own attributes. In general, opal energises, balances, and lifts the spirits, bestowing optimism and a general love of life and all that it holds. It stimulates creativity and psychic development, and encourages self-reflection, allowing old issues to come to the surface and be magnified and cleared, helping us to let go of the past, including old past-life issues that have come through to this lifetime. It is still used to improve vision, and in the treatment of eye diseases. 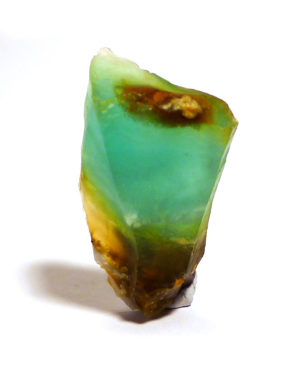