Grey-green to purple-green basalt, with inclusions of paler green bytownite.

Basalt is the most common igneous rock on the surface of the earth, although most of it forms on ocean floors, and is therefore not visible. It is the result of the cooling and solidifying of magma released through certain types of volcanic eruption. Basalt is relatively rich in iron and magnesium, and is composed primarily of plagioclase feldspar, pyroxene and olivine. Most basalt is fine-grained and compact in habit, but it is not uncommon for it to have distinct crystals set within a fine-grained groundmass (known as porphyritic basalt). This is the case with Lakelandite, which has visible crystals or masses of plagioclase feldspar (probably bytownite). Lakelandite formed about 470 million years ago during a violent and cataclysmic period in what is now the Lake District, when huge volcanic eruptions deposited a 7-kilometer-thick layer of rock over a 10 million year period. This rock was subsequently buried under 3 kilometers of sedimentary rock. In areas where glacial action and erosion have cut into this sedimentary rock, small deposits have been exposed.

Basalt (general) symbolises potential – the potential we are born with, and the potential to change outcome or create a new direction or focus in our lives. It is also symbolic of the cycle of creation and destruction (Shiva). Basalt allows us to tune into Earth’s powerful geological process, giving us strength to deal with difficult situations, and energy to release old patterns that are no longer serving us. It helps us return to a time in our lives before we were shaped and fashioned by outside influences (such as upbringing, religion, schooling, etc), so we can be free of that programming and once again find our true selves. Given the rather dull colouration, it’s surprisingly energising and clearing, and activates and aligns the entire chakra system, with particular emphasis on the Solar Plexus, Heart and Throat Chakras (note that bytownite demonstrates similar qualities). The energetic properties of basalt will vary to some extent with the locality, as the mineral content is variable. Bytownite has a powerful vibration that seems to affect the area of the body that is nearest. For example, used near the Root Chakra it can aid grounding. It aligns and balances the Chakras, opens the Throat and Crown Chakras, and can be used to energise the Solar Plexus area and treat the kidneys, spleen and stomach. It strengthens the metabolism and can be used to treat skin complaints, especially by washing the affected area with bytownite crystal water. Lakelandite is said by its discoverer to help deal with trauma and bring peace and order from chaotic situations. Interestingly, I think this can be said of all basalt, though I also find basalt – including lakelandite – highly stimulating, and possibly over-stimulating for the Heart and Solar Plexus in certain situations. I understand that some practitioners are using it in conjunction with Preseli blue stone. This is an interesting combination, as both stimulate the heart. However, when both are used in tandem, the heart reaches a level of stasis, meaning the energy feels neutralised and therefore calmer. 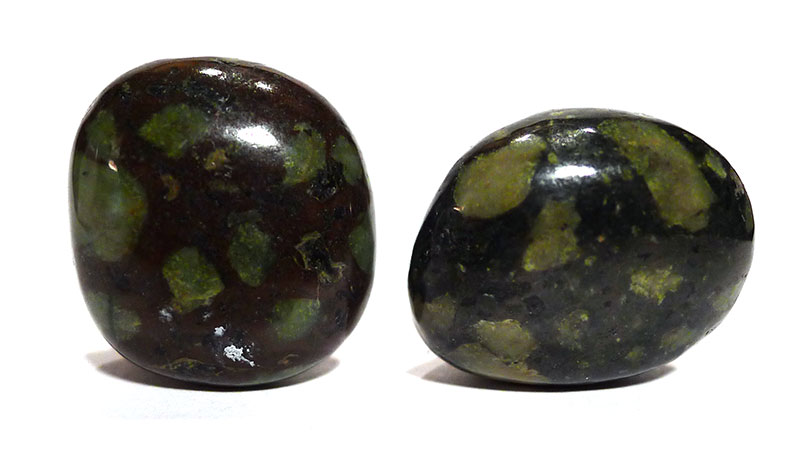