Properties:
Labradorite is a multi-dimensional mineral, working on both the physical and the etheric bodies. Its beautiful schiller (or play of light) gives an outward indication of its ability to help us look within and self-reflect. It also aids the recognition and enhancement of psychic abilities, while at the same time being both grounding and protecting, and so enables us to work with our psychic gifts in a safe and healthy manner. Labradorite helps to keep the energy field clear, especially for those who have a tendency to pick up on other people’s emotional issues, and can also be very balancing for the chakras. As an added bonus, it can also maintain our baseline energy level, helping prevent burnout and depletion in people who have a tendency to overwork. In his book Crystal Power, Crystal Healing, Michael Gienger refers to it as “The Old Warrior’s Stone”, as he believes this quality also works for people who have been through many past lives. He also calls it the “Illusion Killer” – another element of self-reflection.
.

Mineralogy:
Labradorite is a variety of plagioclase feldspar. It is usually dark grey to blue, but occasionally occurs as clear, pale yellow or orange. It has a schiller (also known as “labradorescence”) in lustrous metallic tints, the cause of which is a subject of debate amongst mineralogists. Some believe it is mainly caused by interference of light by lattice distortions within the mineral, while others suggest it is the result of layers of another feldspar separating out during the cooling process (as with moonstone). Labradorite is a popular jewellery gemstone. Gem grade labradorite is found in Madagascar, Finland and Russia, and, in nearly transparent form, in southern India. Spectrolite is the marketing name of a particularly high quality material originating from Finland; rainbow moonstone is sometimes mistakenly referred to as spectrolite. Oregon sunstone (Bytownite) is actually a variety of labradorite

History and Tradition:
Named for its type locality, Labrador. Because of its relatively recent discovery, there are no ancient traditions associated with this mineral. 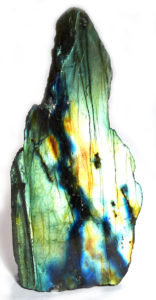 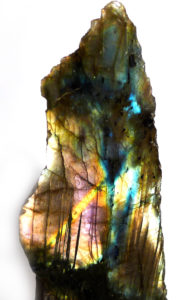 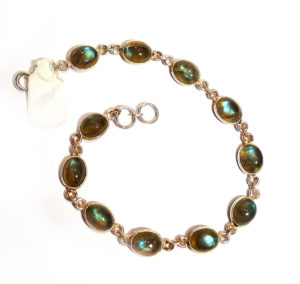 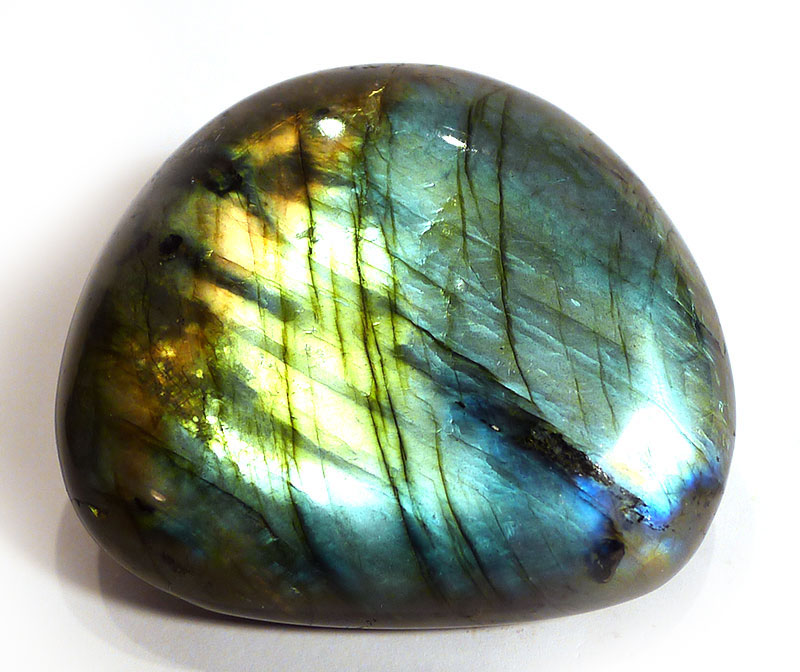 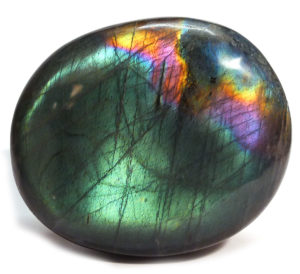