Priority: Important
Key Words: Calming, centring; celestial communication; connective tissue
Birthstone: Secondary birthstone for Taurus, Libra and Aries
Chakra: Depends on colour
Element: Depends on colour
From the Greek Kyan (Cyan) for ‘blue’. Ironically, it has been discovered in a number of other colours in recent years.

Mineralogy: Kyanite is formed during the regional metamorphism of clay-rich sediments. It is one of three polymorphs with the same chemical formula, the other two being sillimanite and andelucite (the best-known andelucite is chiastolite). Each forms under different temperature and pressure ranges. Kyanite is a major mineral source of mullite, an aluminium silicate used in spark plugs and heat-resistant porcelain.

History and Tradition: Named in 1789 by Abraham Gottlieb Werner from the Greek word kyanos, meaning “blue” – the common colour of the species. The French spelling, cyanite, was commonly used by mineralogists through much of the 19th and early 20th centuries. Its alternative name, disthene, means “two strengths”, due to its varying hardness (4.5 when scratched down its length, and 6 when scratched across). There are no traditions associated with this mineral.

Healing Properties (for Blue Kyanite): Blue kyanite’s energy is cool and not forceful, and it encourages calm, rational thought. It opens the Throat Chakra, as well as the Bindu Visarga*, so facilitates meditation, and aids a quick transition between states of consciousness. It is an attunement stone, and useful in connecting and communicating with one’s spirit guides, Angels, or higher powers. Kyanite is very directional. Held or worn vertically, it is profoundly centring. Physically, it can be useful in alleviating pain due to fibromyalgia, and other muscle diseases or injuries, and is particularly helpful in treating ligament and tendon damage, as well as reducing swelling in the affected area. Blades of kyanite are sometimes used to comb through and cleanse the body’s energy field.

* The Bindu Visarga is a point at the back of the top of the head. 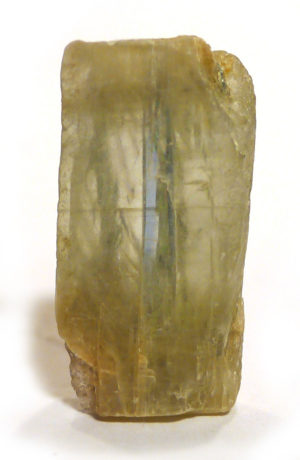