Properties:
As fossilised wood is a chalcedony replacement of organic wood, and many of its properties will be the same as agate and other chalcedonies. In addition, fossilised wood is very calming and grounding. Itstrengthens confidence and self-belief, and reinforces our connection with the Earth, thereby easing the ‘longing for home’, and bringing acceptance of the physical body and planet we currently occupy. These properties can help to stabilise health and stimulate recovery from illness. Melody recommends it as an aid for remembering past lives through meditation.

Fossilised wood is a chalcedony replacement of organic wood. It formed when dead or fallen trees were deposited directly into ground water, such as a river or flood plain, and became covered in accumulated sediments containing large quantities of volcanic ash. The wood was initially preserved through lack of oxygen. As the volcanic ash dissolved it released silica, which filled the cavities around and within the cell walls of the wood. In many cases the replacement of plant tissue is so precise that the internal structure, including growth rings and even cells, as well as the external shape, are faithfully reproduced. Iron in the ground water is responsible for the range of bright reds and yellows, although in some cases bright green is created by chromium. Replacement minerals can also be pyrite, coal, opal, calcite, and others. The fossil age varies. The Petrified Forrest in Arizona, for example, dates from the Triassic Period (200-250 million years ago), while others may be Late Carboniferous, Jurassic or later.

History and Tradition:
The ancient Egyptians used fossilised tree trunks to build their corduroy roads across the desert. Around 4,000 years ago, the Etruscans discovered the fossilised trunk of a cycad that had previously been used as a sharpening stone by Neolithic people. Apparently recognising it to be of importance, the trunk was placed in a tomb of the Marzabotto necropolis. In Arizona and other parts of the US, fossilised wood provided the raw material for prehistoric tool production, and was used to make arrowheads, spear points, scrapers, and knives. It was also traded throughout southwestern US by prehistoric people. 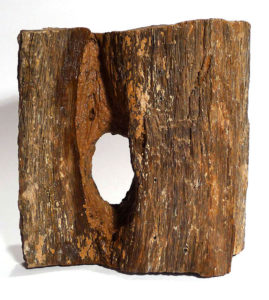 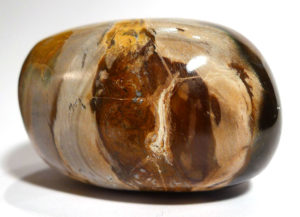 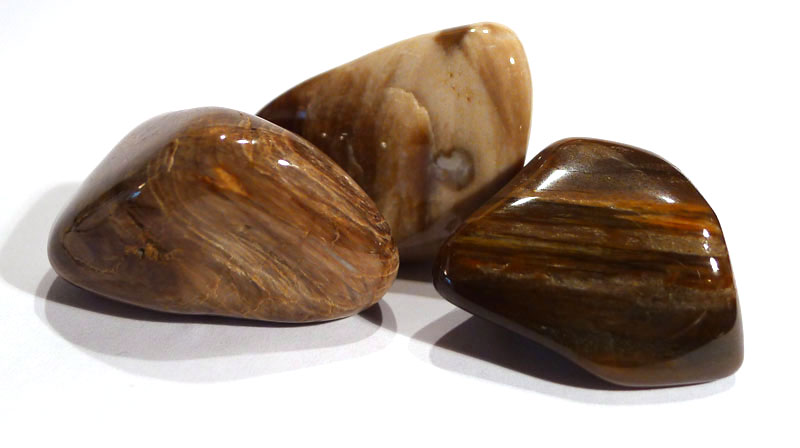