Properties:
Ferroan Enstatite (brown translucent) is lively, friendly, and can have a mood-lifting effect. It helps us to re-charge the body’s flow of energy while keeping our feet firmly on the ground. It calms the mind, and helps to release tension held in the body, which in turn can have a pain-relieving effect when the pain is a direct result of tension (such as a tension headache). It aligns and awakens the major chakras, with a particular emphasis on the Sacral Chakra. It “shines a light” internally, so we become aware of any areas in need of work, particularly on a physical level. Enstatite can be useful in regression work, including past life regression.

Golden Enstatite (with little or no iron content) has similar properties to brown ferroan enstatite, with a lighter, sparkling, ‘zingy’ energy, and its main attention focussed on the Solar Plexus rather than the Sacral Chakra. Its energy is at first uplifting, then relaxing. In addition to the properties associated with dark brown enstatite, golden enstatite strengthens damaged tissue and scar tissue, to help prevent damage from recurring. More importantly, golden enstatite is truly a crystal of the present time, as it guides our awareness through the current evolutionary process, giving us the ability to see beyond three dimensions.

Mineralogy:
Enstatite is a common rock-forming mineral in the pyroxene group. It most commonly forms as massive aggregates, but occasionally forms well-developed short prismatic crystals. Gem-material material has been mined in the localities of Mysore, India, Canada, Sri Lanka and Myanmar. It has no industrial uses, but is mined commercially as a gemstone.

Enstatite forms a solid-solution series with ferrosilite (FeSiO3), meaning that iron (Fe) substitutes for magnesium (Mg), creating a series of closely related minerals depending on the level of iron to magnesium. Bronzite, which is brown with a metallic lustre, hypersthene, which is grey with an interesting play of light, and ferroan enstatite, which is also brown, are all mid-range members between enstatite and ferrosilite. The name hypersthene is now considered redundant by mineralogists, and is generally called ferroan enstatite. However, as it is used in healing and has specific energy that differs from bronzite and translucent ferroan enstatite, I am making a distinction

History and Tradition:
Named from the Greek enstates – “opponent” for its refractory nature under blowpipe flame (according to MinDat). Ronald Bonawitz states that it is used as a refractory to line ovens and kilns, and therefore “opposes” heat. Bronzite is presumably named for its bronze colour and metallic lustre. Due to its relatively recent discovery, there are no traditions associated with this series of minerals. 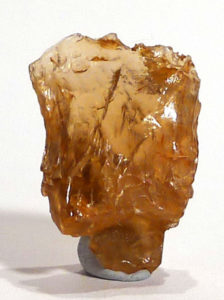