Properties:
Selenite gypsum has a high vibration, and its primary gifts are cleansing, clearing, and the release of stagnation. It is one of the few crystals that is genuinely self-cleansing, and it is frequently used to cleanse and charge other crystals, as well as areas. In the right situation it can help to restore equilibrium, so although it may be quite ungrounding and over-stimulating for some, many find it calms and soothes to such an extent that it is sometimes even used as an aid for sleep. A small piece of satin spar, such as a tumble stone, can be placed directly on the body to clear stagnation in a specific area. It can be used in meditation, either by holding it or sitting in a ‘stone circle’, to connect with the highest energies; or to clear the mind when making difficult decisions.

Special Handling:
Selenite, especially satin spar, is very soft and should be handled gently and not carried in a pouch with other crystals, to avoid damage. Also avoid getting it wet. It is a hydrous mineral, meaning that not only does it contain water, but it readily absorbs water if placed in it. If this happens, it will become dull and may even fall apart. On occasion your crystal may need cleaning (as in getting the dust off), in which case, either vacuum it with care, or use a slightly dampened sponge or cloth that has been thoroughly rung out first, to wipe over it.

Mineralogy:
Gypsum is widespread and is found in a number of different forms. Well-developed crystals can be ‘blocky’ with a slanted parallelogram outline, bladed, or occur in other shapes such as ‘ram’s horn’, ‘stag horn’ and ‘fishtale’, named after their appearance. When formed of parallel fibres with a silky lustre it is known as satin spar, and rosette shapes are known as desert rose (along with the denser version formed by baryte). Alabaster is gypsum in fine-grained, massive form. Gypsum occurs in massive beds as a result of the evaporation of ocean brine. It can also be the result of alteration of sulphides in ore deposits, as disseminated crystals in sedimentary deposits, and deposits around volcanic fumaroles. The famous White Sands (Missile Range) in central New Mexico, USA is formed of gypsum, and is one of nature’s largest mineral deposits. The Cave of Swords in Mexico is named for its enormous selenite crystals. Gypsum has been important in industry for thousands of years, and is used in mortar, building plaster and plaster of Paris. Because satin spar is soft and easily carved, and also displays an interesting play of light, it is available in a range of created objects including wands, sculptures, palm stones and lamps.

History and Tradition:
The name selenite was first used by J G Wallerius in his 1747 book Mineralogia, eller Mineralriket (p.50), as “selenites”, from the Greek σελήυη, selene, for “moon”, This was in allusion to the moon-like white reflections of the mineral, or to the quality of the light transmitted by semi-pellucid gypsum slabs, which are cleavage and used as windows. Satin spar is cited by Kunz as an amulet for good fortune and protection (no dates or origin given). Gypsum is from the Greek gypsos, meaning plaster, chalk or cement.

Gypsum was mined by the Ancient Egyptians and used in mortar and plaster in the Giza necropolis. They also used it elsewhere to make masks and statues, as wall plaster, and to cover bodies in burials. The Romans discovered that by heating gypsum to 300˚C, it would make a plaster that would set hard when mixed with water – a formula still used today in the building industry. Of all mined gypsum, 75% is used in plaster of Paris. 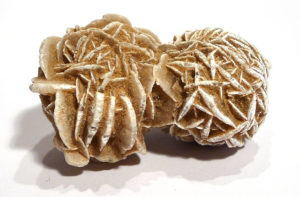