Properties:
Cinnabar is a major mercury ore. In alchemy, mercury represents the Lunar Queen, the Divine Feminine aspect of the process, and therefore one half of the essence of transformation, to be balanced with the masculine aspect, represented by sulphur. Cinnabar is one of the few truly red minerals, and through colour therapy is associated with the Root Chakra. However, at its heart, cinnabar is beyond doubt mercurial, the energy flitting from one place to another, without appearing to connect with a specific energy centre or emotion. Because of its association with commerce and negotiation, plus the link of good luck and abundance with the colour red in China, cinnabar can be an effective aid in improving career, negotiating a better salary, or starting a new enterprise. At its core, cinnabar is transformational, and can be used to instigate a new spiritual process, giving us the opportunity to transform our “base metal” into “gold”.

Special Handling:
Mercury is highly toxic, and you should always wash your hands after handling. Do not inhale dust and use caution when breaking. Do not lick or ingest. Do not heat in an unventilated environment as it emits toxic fumes. Mercury sulphide is relatively insoluble, and toxicity of the pure material is low, but be aware that many samples of cinnabar, especially those which are ‘massive’ rather than crystalline, also contain traces of native mercury, and this is far more easily absorbed by the body.

Mineralogy:
Cinnabar is widely distributed, usually associated with stibnite, pyrite and marcasite in deposits around hot springs, and in veins in recent volcanic rocks. Formation is usually massive or as granular aggregates, and crystals are rare.

History and Tradition:
From the Persian zinjirfrah and the Arabic zinjafra, both of which mean “dragon’s blood”, but not to be confused with the plant resin “dragon’s blood” used in Chinese medicine. There is archaeological evidence (although not proof) that it was mined from the second millennium BC in ancient Egypt, and it has been mined continuously for at least 2,000 years in Almadén, Spain. Cinnabar is the main source of mercury.

In addition to the production of mercury, cinnabar was widely used until recently to create the pigment vermillion, and as the red pigment in Chinese and Japanese lacquerware. Cinnabar was prized in many ancient cultures worldwide for ornamentation. The ancient Greeks used it in ointments, the ancient Egyptians and Romans in cosmetics. In the alchemical process, the extraction of mercury from cinnabar was linked with rebirth, and mercury was therefore believed to prolong life or even bestow immortality, so was rubbed on the skin and taken internally in India, China and Europe (recommended by Paracelsus), before it was realised it was toxic.

From the 16th to early 20th century, mercury was used in the extraction of certain precious metals, such as silver and gold, leading to mercury contamination around old mines and more recently around some unregulated mines.

Because of its erratic behaviour, the element mercury was named for the Greek god Mercury, messenger of the gods, flitting swiftly from place to place on his winged sandals. Mercury (the god) was also associated with trade, so cinnabar is sometimes referred to as a “merchant’s stone”, and considered beneficial in commerce and negotiation. 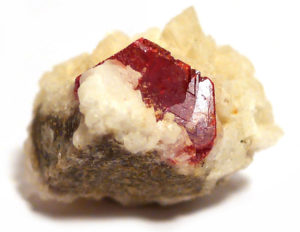