Properties:
Serpentine has very few traditions associated with it, and in the past was primarily used for the prevention and treatment of snakebite, when it was worn, or placed directly against the skin to draw off the poison. However, this gives a clue to some of its current uses – particularly detoxification and support of the immune system. Its energy is subtle, but it is worth persevering with it. Serpentine calms, balances on many levels, and (with the exception of precious serpentine), has a very earthy, grounding quality, making it a good choice for holding in meditation, especially when the user finds it difficult to calm the mind. Gienger recommends it for peaceful conflict resolution, which makes sense, as it definitely soothes ruffled feathers. Melody associates it primarily with the stimulation and balance of Kundalini, presumably because of the serpent association. It is used widely in the treatment of some heart complaints, such as arrhythmia, and also irritable bowel syndrome (IBS) and abdominal cramps. Most serpentine leaves the user feeling lighter and more balanced.

Chrysotile has the same heart/abdomen connection as other serpentines, but its energy is very light. It is profoundly clearing, and balances and aligns all chakras. It has an interesting angelic connection, so may feel as if the clearing is from the flapping of wings, which leaves the user feeling lighter, centred and holding themselves upright.

Mineralogy:
Serpentine is a group of at least sixteen different related hydrous silicate minerals, which are divided into four structural subgroups: chrysotile, which is fibrous and used to produce asbestos; antigorite, which occurs in corrugated plates or fibres; lizardite (named after the Lizard Peninsula in Cornwall), a fine-grained variety; and amesite, which forms platy or pseudohexagonal columnar crystals, usually massively or as pseudomorphs. Serpentine occurs as a secondary mineral, resulting from chemical alterations of olivine, aphiboles or pyroxenes. Its localities are so widespread, it is impossible to list all sources. Rich, translucent apple-green varieties are sometimes called “precious serpentine”, “noble serpentine” or “Chinese serpentine”, and marketed as “new jade”.

Chrysotile is the fibrous material that is spun to create asbestos. It is not considered dangerous in its natural form (large amounts would need to be inhaled over several years to cause a problem), but I don’t recommend sniffing it – just in case! It is closely related to lizardite, and is sometimes found interlayered with it.

History and Tradition:
Serpentine was named in 1564 by Georgius Agrigola (Georg Bauer) from the Latin “serpens”, in reference to its usually mottled appearance, which resembles the skin of a snake.

Serpentine is relatively soft, and has been a popular carving mineral for thousands of years. The Venus of Galgenburg, a dancing figure discovered in Austria dating from about 30,000 years ago, is carved in serpentine. Serpentine was the favoured stone for use in Babylonian and Assyrian cylinder seals from around 4,000 to 2,500 BC, and Egyptian scaraboid seals from around the 3rd century BC. It was widely used in Minoan carvings between 3,000 and 1,100 BC. It is possibly the light green stone (usually identified as topaz) in the Breastplate of Aaron, High Priest of the Tribes of Israel, in the Book of Exodus. Serpentine was one of the stones used in religious carvings by the Aztecs.

Gienger says it was used for protection from pre-Roman times, but I have been unable to find a historical reference for this. According to Kunz, 19th century Italian peasants believed wearing serpentine would prevent snakebite (so indeed, was regarded as a form of protection), and that it would also draw off the poison once bitten.

Chrysotile was named in 1843 by Franz von Kobell from the Greek chrysos, meaning “gold” and tilos for “fibre.” 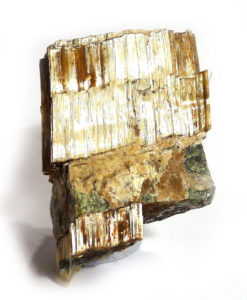 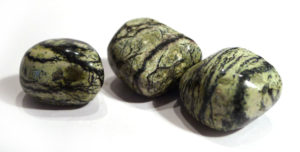 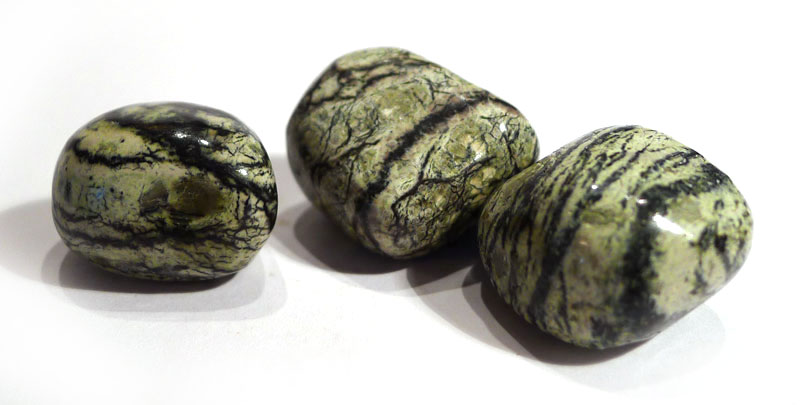