Properties:
Also known as Gem Silica (an old name that is little used now).
Chrysocolla possesses a sense of profound calm, and encourages neutrality and clarity, so can be helpful when faced with difficult decisions or new phases in life. It bestows inner strength and endurance, and brings courage, especially for circumstances that involve public speaking and teaching, helping us to speak our truth and wisdom with lucidity. Naisha Ahsian calls it the “teaching stone”, due to its ability to help us speak our highest knowledge. In treatment, chrysocolla shares qualities with many other copper minerals, in that it is detoxifying and balancing, and supports and stimulates the immune system. It is one of the first minerals I choose when treating infections and illnesses affecting the sinuses, throat, and lymphatic and upper respiratory systems. It also helps to balance thyroid function, and cleanses and clears the Solar Plexus and Sacral Chakras, releasing old, held emotions such as anger and fear (in a similar way to larimar). Its energy tends to be earthy rather than ethereal, and clears through the legs and into the Earth. Melody suggests using this spiritual/Earth connection to understand what is required for the Earth to heal itself – indeed some polished pieces and spheres have the appearance of a tiny Earth. Examples with a crust of druzy crystals can create a playful connection with nature spirits, enabling us to communicate with the Fairy realm.

Mineralogy:
Chrysocolla is copper silicate hydroxide, a sedimentary (secondary) mineral, commonly associated with other secondary copper minerals, such as malachite and azurite, with which it is commonly intergrown. It is also frequently intergrown with other silicate minerals such as quartz, chalcedony or opal, and is sometimes found with a crust of druzy quartz crystals (see above photo). One variety from Israel, known as Eilat stone, is intergrown with turquoise and malachite. Chrysocolla is typically found as glassy botryoidal/rounded masses or bubbly crusts, and as tiny acicular crystals or tufts of fibrous crystals. Colouration is blue to blue-green. Although quite soft, it is sometimes cut en cabochon for use in jewellery.

History and Tradition:
The name was first used by Theophrastus in 315 BC, and comes from the Greek chrysos, meaning “gold,” and kola, meaning “glue,” in allusion to the name of the material used to solder gold (I have no reference to its actual use in soldering gold, so this must be in reference to the appearance). André-Jean-François-Marie Brochant de Villiers revived the name in 1808. The name is often used for any massive, globular, glassy, blue to green copper-bearing silicate minerals which have not been specifically identified as to species. Multiple analyses of different compositions have been offered over the years. Its identification as a mineral is relatively recent, and there are no traditions associated with it. I have read that chrysocolla has been used for many generations as a healing stone among Native American cultures, mainly to help strengthen the body’s resistance, but have found no direct reference to this in older texts. 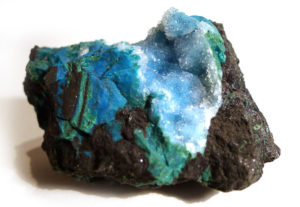 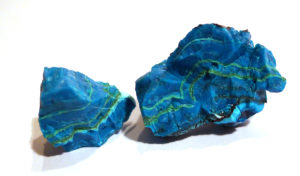 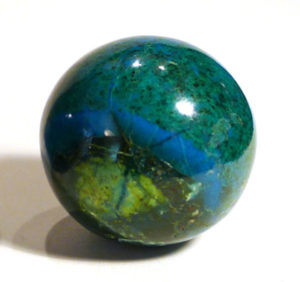