Properties:
Chalcedony nodules and botryoidal clusters are formed of tiny fibres that radiate outwards from the centre of the crystal. This will give you an indication of how the energy of the crystal flows through the body. Nodules tend to focus on one central chakra, such as the Heart, Solar Plexus, or Throat, and slowly permeate the rest of the body from that point. Think of dropping ink into a bowl of clear water. It moves with the current of the water, spreading in uneven clouds, but eventually colours the water evenly throughout. Chalcedony nodules clear and stimulate on a cellular level, enlivening the systems of the body, while at the same time having a remarkably calming effect on the psyche.

In addition to the general qualities of chalcedony nodules, grape chalcedony has a stronger connection with the Heart than the Third Eye Chakra (as one would expect from the colour), and is more in alignment with the feminine than masculine. This is not to say it is inappropriate for masculine use – just that it will amplify qualities most often associated with the feminine, such as softness, kindness, empathy and compassion. It is calming, and will gently settle the mind (psyche), making it helpful for those who tend to overwork, or have too many projects on at the same time. In this capacity, it aids decision-making, and brings clarity without ungrounding the user.

The nodules overlap without completely intersecting one another, symbolic of community, meaning grape agate can be beneficial for groups or communities who wish to work together harmoniously without sacrificing the integrity of the individuals within the group, as well as aiding understanding of another’s viewpoint without compromising one’s own. The same formation also makes it useful for interdimensional work, as adjacent dimensions overlap without intruding into one another’s space. As with many chalcedonies, grape agate attracts nature spirits, and can be used to call in their playful energy. 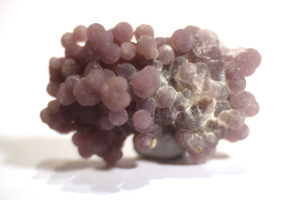