Properties:
Celestobaryte combines the general qualities of baryte and celestite. The orange massive variety also contains hematite and pyrite, giving it the added benefits of iron: grounding, protection, and warrior energy. Orange celestobaryite is very clearing and subtly energising, leaving the user with a clear, quiet mind, and a sense of detachment from emotive situations, and able to access their inner strength. It can gently improve libido, if used with that intention. Massive celestobaryte is not as fragile as celestite (see below under Method and Special Handling), and has been carved into tools for massage and other bodywork. Used in massage, it quickly releases tension held in the muscles and even relieves the resulting pain; it is also excellent for clients who find it difficult to ‘let go’ and relax.

Judy Hall suggests it is a magical stone and advocates its use in magic and shamanic practice – quite a different take on its energy from mine, and probably worth exploring.

Mineralogy:
Celestite is the strontium analogue of baryte, with baryte often replacing strontium freely within the structure. It may also contain some calcium. Celestite is one of the most important sources of strontium, which is used to create the red colour in fireworks, tracer bullets and signal flares. It occurs mainly in sedimentary rocks such as bedded deposits of gypsum and halite, and also in cavities in bedded limestone and dolomite. The crystals are orthorhombic, with a distinctive diamond-shaped cross section, but it also forms as massive, fibrous, granular or nodular aggregates. High quality collectors’ examples come from Madagascar, Mexico, Canada, USA and Italy. Most of the celestite used in crystal therapy is the beautiful, transparent blue variety that originates from Madagascar.

Celestobaryte, or barian celestite, is a barium-rich variety of celestite. It usually forms beautiful tiny white fibrous crystals. There is a dense, opaque massive variety that originates from Chipping Sodbury, Gloucestershire, England. This contains hematite and pyrite inclusion, and is orange (probably due to iron oxide), with strong banding in cream and grey

History and Tradition:
Celestite was named in 1799 by Abraham Gottlieb Werner from the Greek cœlestis, meaning “celestial”, in allusion to the faint blue colour of the original specimen. Baryte refers to its barium content. There are no healing or talismanic traditions associated with this mineral. 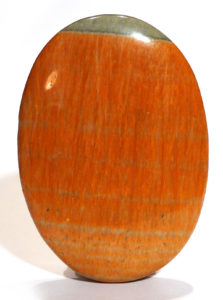