Properties:
Brazilianite has a sweet, light-hearted and vibrant energy that lifts the spirits and encourages us to rediscover our playful essence. It cleanses and balances on many levels, supports the immune system, and brings a sense of expansion and light into the upper body, relieving tension in the area and easing the breath. Brazilianite can create a heaven-heart connection, opening us to universal love and helping us to remain buoyant and optimistic, even when our work (especially spiritual work) seems heavy. Its playful quality attracts nature spirits, facilitating communication and interaction.

Mineralogy:
Brazilianite usually forms short prismatic or elongated crystals of chartreuse-yellow to pale yellow. It is found in granite pegmatites in association with tourmaline and apatite. Brazilianite is relatively hard, but is both fragile and brittle, making unsuitable for use in jewellery.

History and Tradition:
Named in 1945 by Frederick Harvey Pough and Edward Porter Henderson for the type locality, Brazil, where it was discovered. 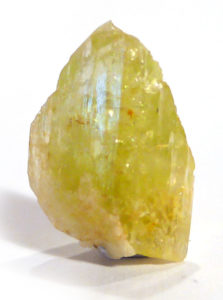 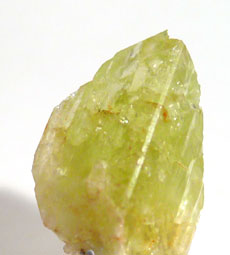