Properties:
Blue John is a variety of fluorite. Fluorite is extremely good for balancing, clearing energy blocks, organising thoughts and ideas, and for keeping the aura clear. Therefore, fluorite alleviates chaos, and can be extremely helpful for people learning new subjects, taking exams, or embarking on large projects or creative endeavours – especially projects which involve a great deal of forward planning or which grow as the project unfolds, making it difficult to see or remember the structure within. It acts as “psychic Teflon” for healers and other practitioners (I’ve been calling it this for years, and only recently discovered it is actually used in the making of Teflon), as it allows us to empathise and feel with others without holding on to their problems or illness. It calms and centres, and creates inner expansion, bringing stillness and an ability to work through difficulties without stress. On a physical level, fluorite can be used to strengthen and promote healing in bones and teeth. While cubic fluorite crystals can be gently grounding, the octahedral shape is calming, and brings clarity in times of confusion.

Blue John shares the properties of rainbow fluorite and violet fluorite. However, it is more of an earthbound workhorse than violet fluorite – I mean that in a good way. It works its way through the physical body, cleansing, balancing and relaxing as it goes.

Fluorite is soft and therefore easy to carve, and its wide colour range makes it a very popular mineral for ornamental pieces. It is also a favourite stone for use in jewellery, in spite of needing extra care to prevent scratching or breaking.
Blue John is massive fluorite, exclusive to Derbyshire. It shows distinct banding of purple with yellow or white, and sometimes green. Purple with yellow is the most common colour combination.

History and Tradition:
Fluorite was named in 1797 by Carlo Antonio Galeani Napione from the Latin fluere, meaning “flow”, due to the ease of melting when used as a flux in smelting and refining of metals. The phenomenon of fluorescence was first observed in fluorite, giving the phenomenon its name (rather than the other way around). Fluorine also derived its name from fluorite, as it is a major source of the element.

Blue John may be a corruption of the French bleu jaune, meaning “blue yellow”. The mines were worked from the early Roman period, when the stone was carved to make drinking vessels, and prized for the flavour it gave wine – which was in fact created by the pine resin used to stabilise the stone while carving. The mines fell into disuse, but were rediscovered in the 18th century 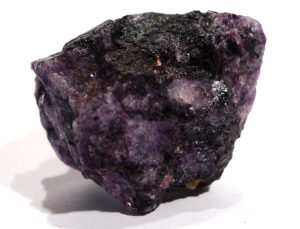 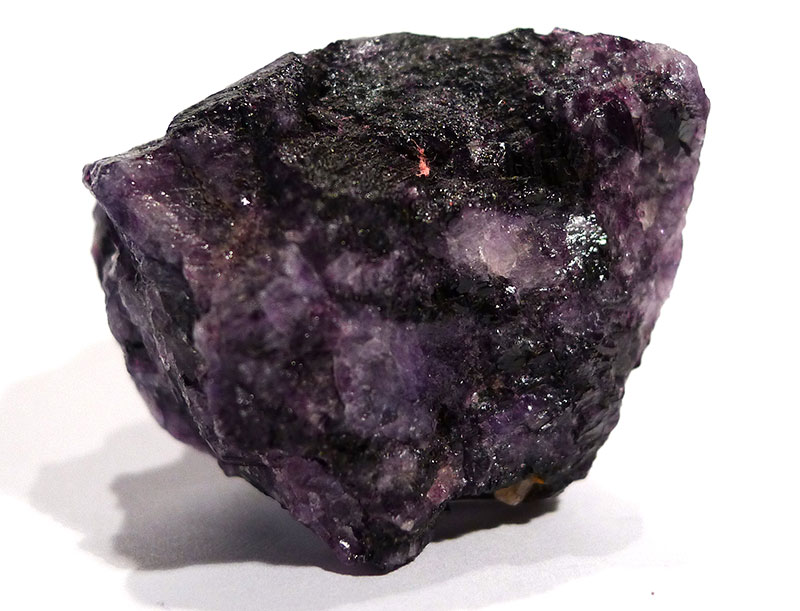