Properties:
Amethyst is an essential for the ‘mineral medicine chest’. It is extremely soothing, and the foremost crystal for relieving stress and anxiety. Its alignment with the Third Eye Chakra means that it influences the pituitary gland, which regulates the thyroid and endocrine function, and it therefore balances and strengthens the endocrine system. It also affects the pineal gland, which regulates sleep patterns, and so is extremely helpful as a sleeping aid, and in treating sleep disorders. This can be achieved by simply placing a small crystal or tumble stone under your pillow. Holding amethyst to the forehead can help to alleviate headaches, and clusters are used to block electromagnetic radiation, by placing them in front of computer monitors, TVs, etc.
The name originates from the ancient Greek for “not drunken”, as it was used as an amulet against inebriation. It is still employed today in the treatment of addiction and unhealthy behaviour patterns, usually by wearing it in the form of jewellery, or keeping it in the immediate environment. Amethyst encourages and enhances both spiritual and psychic development. It is a blessing in times of bereavement, as it helps us to see that there is something beyond this lifetime.

Mineralogy:
Amethyst is a variety of macrocrystalline quartz. It is always purple to violet, due to the inclusion of iron, and sometimes manganese. Depth of colour may vary from pale and translucent to deep and opaque, and may appear pinker when the manganese content is higher. Crystals from Brazil and Uruguay are most commonly available. These form in radiating masses on a bed (known as druze), giving individual crystals the appearance of pyramids; so although they come to a termination, most crystals will have a narrow base without defined side faces. Lower grade amethyst is frequently heat-treated, changing its colour to yellow so it can be sold as citrine.

History and Tradition:
Amethyst has a long and rich history. The name (which may have Hebrew or Persian origins) is from the Greek for “not drunken”, as it was worn as an amulet against inebriation. This practice appears to have originated in ancient Egypt, where amethyst was associated with the astrological sign of the Goat (Capricorn) – as the goat is the enemy of vines and vineyards (presumably because it would eat them), amethyst was believed to be an antidote to wine. The belief persisted in ancient Greece and ancient Rome, and carried on in Europe through to the Middle Ages. There is some speculation that this belief may have been the result of the bowls of drinking vessels often being carved out of crystal, and in the case of amethyst, the purple colour causing water to appear as wine, without its inebriating effect.
The ancient Egyptians believed amethyst to be a symbol of the intellect. In the Egyptian Book of the Dead, there is a heart burial amulet carved of amethyst, which is a symbol of the wisdom of life. Egyptians also wore it as an amulet with swallow feathers and strands of peacock feathers, for protection from sorcery. Cleopatra’s signet ring was carved amethyst.

Ancient Roman soldiers wore amethyst as an amulet to protect them in battle, and Roman matrons wore it to help them retain their husbands’ affection.
Amethyst is mentioned in the Old Testament as the ninth stone in the breastplate of the High Priest Aaron (Exodus 28: 15-23), representing Daniel’s tribe and symbolising judgement. It also appears in the New Testament (Revelations 21: 19-20) as one of the foundation stones of the New Jerusalem. In the Roman Catholic Church, the colour and purity of amethyst are linked to the transformation of Christ’s blood into wine in the sacrament of the Mass; goblets of carved amethyst have been used in the celebration of the Eucharist for centuries. The purple colour signifies royalty and the dignity of the priesthood, and it has been the stone of choice for Bishops in their ceremonial rings for hundreds of years.

According to Camillus Leonardus (Speculum Lapidum, c 1502), amethyst has the power to control evil thoughts and quicken the intelligence, and is also sobering for the overly passionate. He goes on to say it assists hunters in the capture of wild animals, and protects the wearer from contagion. According to the Peterborough Lapidary (late fifteenth century, after a number of earlier lapidaries), amethyst encourages a strong belief in God, makes one clean in body and soul, and bestows a good singing voice.

Bruce G. Knuth (Gems in Myth, Legend and Lore, Jewelers Press 2007), cites an old remedy for headaches which involves tying amethyst to the forehead with silk.
This story of Bacchus and Amethyst comes from a French poem of 1576, although it is often cited as a Greek myth. Bacchus was in a foul temper as a result of some neglect he had suffered, and vowed that he would take his revenge by ordering that the next person he met would be devoured by his tigers. The unfortunate mortal was a beautiful and pure maiden named Amethyst, who was on her way to worship at the temple of Diana. As the tigers attacked, she called for the protection of Diana, who saved her from a worse fate by turning her into a pillar of pure white crystal. Repenting his cruelty, Bacchus poured wine as a libation over the petrified maiden, giving the crystal its beautiful purple hue. 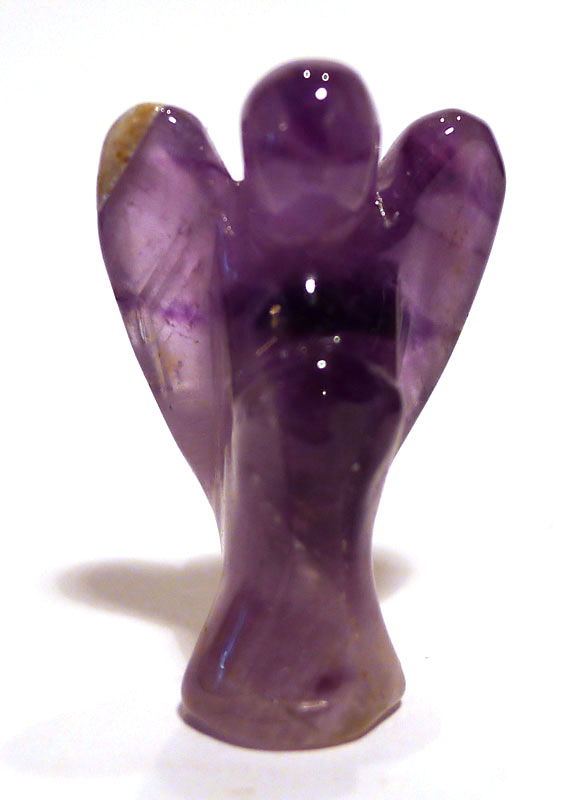 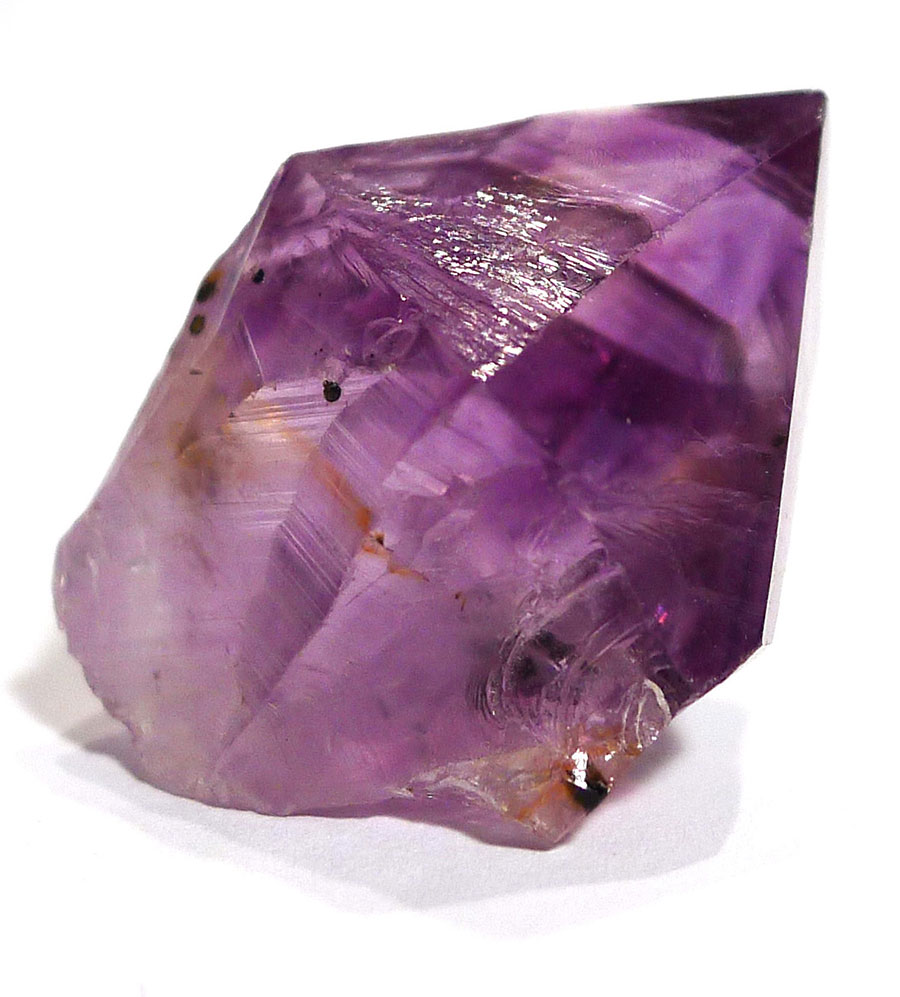 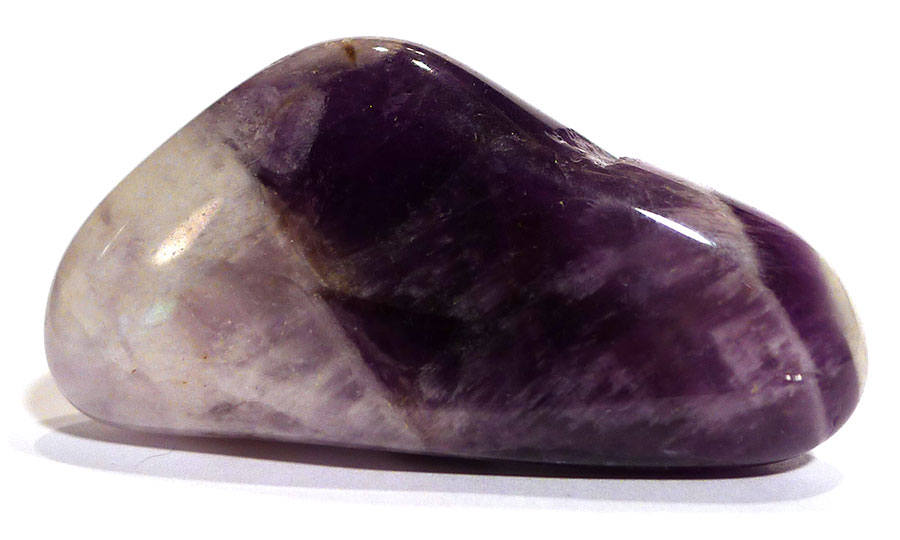 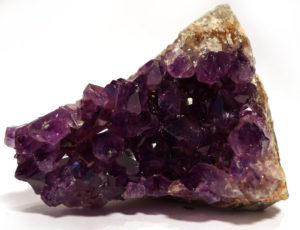